Magers Hall isn’t just a place to live; it is a place where responsible leaders are shaped. Magers Hall provides students with a relaxed atmosphere that promotes individuality and “small group” identity. Students have a great balance between academics, social events, and community involvement. Magers Hall was completely renovated during the summer of 2005 and students were given the opportunity to create a theme and house names for the building. Students agree that Magers Hall is friendly, comfortable, generally quiet, and “homey”. Magers Hall consists of six co-ed houses. It is building 25 on the campus map. 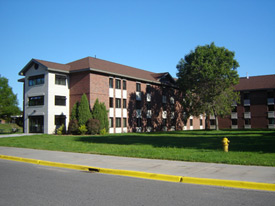 Vision Statement: A fun-loving, supportive community that prides itself on crating new traditions and lasting relationships.

Mission Statement: This is not just a place to live. Magers Hall is a place where responsible leaders are shaped. Our relaxed atmosphere offers a balance between social and academic success. We have pride in individuality while still thriving as a connected community. Come to a residence hall where you will build relationships that will last the rest of your life.

Magers Hall opened in 1966 and is named after Mildred Magers, an NMU French professor who was known for her love of teaching and helping students.