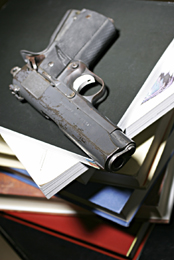 It is a violation of Northern Michigan University ordinance to bring any lethal or dangerous weapon on the NMU campus.

These include (but are not limited to) rifles, shotguns, handguns and explosive devices that are capable of casting a projectile by explosion, air, gas, chemical or mechanical means.

Students living on campus who own guns for hunting and other purposes must register and store them at NMU Police Department.

You are not allowed to use, carry, transport, store or possess lethal or dangerous weapons or explosives anywhere on the NMU campus. The only exception is that public officials licensed by their profession to carry guns can do so as required by their professional duties.

Additionally, NMU is considered a wildlife, fish and bird sanctuary. As such, shooting, maiming or capturing of wildlife is prohibited.