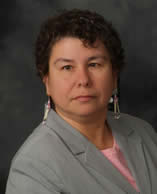 NN: Where are you from / what is your tribal affiliation?

Brozzo: I am originally from Ironwood, MI, but have now lived in Marquette for 22 years.  I am an enrolled member of the Keweenaw Bay Tribe of Chippewa Indians.

NN: Why did you choose NMU?

Brozzo: I completed an Associate’s Degree at Gogebic Community College in Ironwood, but couldn’t find work. This was also the same time that I was going through a divorce, so I decided that moving to Marquette and coming to NMU would give me a Bachelor’s Degree and a new beginning in a new city.

NN: What was your major/minor? What degree did you earn?

Brozzo: I have a Bachelor’s Degree in Business Administration with a major in Accounting.  Since then I have also earned a Master’s Degree in English writing and a Master of Fine Arts in Creative Writing.

NN: Were you part of the NAS minor? What was the program like back then? Who taught, what classes, etc.

Brozzo: Actually, I was a student member involved in the creation of the NAS minor.  I did take what was then EN 315:  Native American literature, where I met Dr. Melissa Hearn, who was the driving force behind starting the minor.  Other than that I have not taken other classes that are currently in the minor, because before long, I was teaching the classes in the minor!  The NAS

minor was started with a grant from Phillip Morris.  The Native American Experience class was created as the only required course, and other courses were parts of other departments, such as the literature class in English and some of the history classes.  Dr. Jim Spresser was the first person to teach the NAS 204 class (UN 204 back then), and he and Melissa were the first co-directors for the Native American Studies minor.  When Dr. Spresser became ill, I was asked to teach the course as an adjunct, and I have been teaching it ever since.  Directorship of the program was then shared by Dr. Hearn and Lillian Heldreth for a while.

NN: What are some of your favorite memories of your time at NMU?

Brozzo: Some of my best memories are in meeting the “famous” people who are guest speakers at NMU, including Joy Harjo, Beth Brant, Diane Glancy, Heid Erdrich,  Kimberly Blasear, Linda LeGard Grover,  Jim Northrup, Sherman Alexie, and many others.

NN: Where have your feet taken you since graduating from NMU?

Brozzo: Actually, I haven’t left!  I am still here with the Multicultural Education and Resource Center and as an adjunct assistant professor with CNAS.

NN: Have you been back to visit? Has much changed?

Brozzo: Even though I haven’t left, so much has changed.  The minor program has grown in size and scope.  Hedgcock is now an office building and not a fieldhouse.  The Dome was built.  Residence halls have been renovated and the new apartment building was put up.  Around town, businesses are booming.  There wasn’t a Wal-mart or Target here when I first came.  Most of that whole stretch was vacant land.  GKC Theater was built.  Housing has grown.  The “birdhouses” along Lower Harbor are new, as are the condos that were build in the old warehouses along the same stretch.  There have been many changes and improvements to the city in the last 20 years.

NN: Do you have anything you would like to add with regards to your time at NMU?

Brozzo:  NMU is family to me.  I’ve meet some great friends and colleagues in my time as a student, faculty and staff member here.  It’s been fantastic watching CNAS grow from just an idea into the department it is today.  And, as April likes to say, “The gift IS in the journey.”

If you know someone who is deserving of a Native American Studies Northern Lights spotlight, please let us know at cnas@nmu.edu or call us at 906-227-1397.