Until May of 2002, CCS was was called the NMU Counseling Center. We are still uncertain when the Counseling Center first opened its doors, but we were able to trace our roots back to the "hip sixties" with the help of the NMU Archives. In 1966 the Counseling Center provided many of the same services we do today, such as group and personal counseling, vocational counseling, and consultations with other university professionals such as faculty and Housing and Residence Life. It also maintained a close working relationship with the Health Center and the Dean of Students Office, as we do today.

However, in addition to those services, the Counseling Center provided all the academic advising for undeclared students (called "no preference students" then). We also provided a large variety of testing services to the university community and supervised practicum students in the counselor education program. The counselors and the graduate students provided individual and group counseling weekly as part of a program for students admitted on a “right to try” basis. They also met at regular intervals with “Freshman Orientation” groups to help them identify with a group on campus and integrate themselves into the larger community. 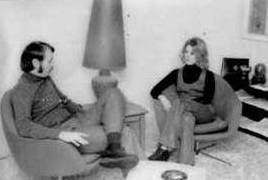 In 1966 the Counseling Center earned national certification. This meant it could attract highly qualified counseling psychologists to NMU, and that the center offered professionally approved counseling practices.

In the late sixties the Vietnam War was creating significant emotional turmoil and the counselors saw an increase in severe emotional disorders and mental illnesses. Again in 1979, the annual report indicated that political and economic instability was generating a marked increase in the need for emergency counseling on campus. Throughout the decades the NMU Counseling and Consultation Services has responded to the changing developmental needs of NMU students, and our mission has consistently been the same. We help students cope with and work through their personal problems and developmental tasks in order to facilitate their successful academic achievement.