What is it like to attend the Police Academy? 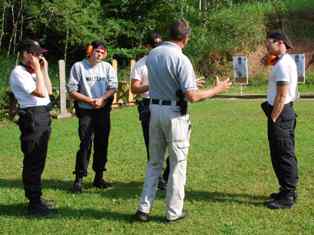 We sent our Criminal Justice Department Student Secretary, Ashley Eslinger, to spend some time with the cadets during the firearms and defense portions of NMU’s Police Academy. “The training seemed very intense,” Eslinger commented. She is right – the cadets received hands-on training with rifles, shotguns, and handguns to gain proficiency all within 72 hours. One instructor commented, “It’s a nice break for them to get out of the classroom.” Eslinger recalls, “The day I was there it was Qualification Day. It was the last day of the firearms training and the cadets were being graded on marksmanship, close combat, and barricades.” 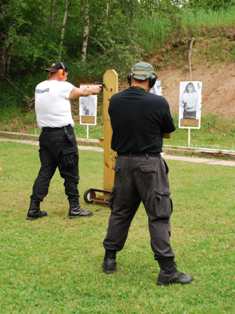 Marksmanship training includes practice firing various weapons to gain preciseness. Close combat is taught because police officers will experience 80% of shootings within 20 feet. Barricade training is being able to shoot from behind a barricade. The cadets ran toward their target, yelled, “Drop your gun,” and then went behind a barricade and shot at each target. Eslinger said, “The cadets were all very nervous and some of them were so nervous, it was throwing off their accuracy. They got better as the day went on and as their nerves calmed.” One cadet commented, “The training is very fast paced. It’s already the 10th week.” Another student said, “It’s tough!” The schedule at the beginning of the program starts early at 4:30 a.m. with wake up, followed by physical training, inspection, class work and training. The day ends at 5 p.m.

The Academy’s strict standards are established by Michigan Commission on Law Enforcement Standards (MCOLES), which includes 16 weeks of training. Cadets are required to possess an associate’s degree. Waivers can be provided for the educational requirement for those with prior military police training, or cadets who are sponsored by their agency. The training takes place during the summer on Northern Michigan University’s campus. All of the instructors of the Academy have a criminal justice background 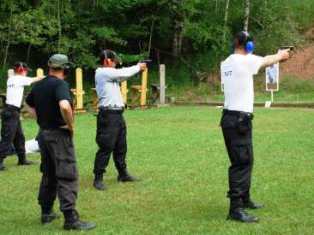 Click here to see more pictures from the Police Academy.