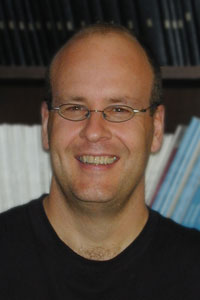 Professor Robert Whalen (MA, PhD U of Toronto) teaches Shakespeare and Renaissance literature. His current research interests include the poetry and prose of George Herbert, textual scholarship, and digital editing. He is a Fellow of the National Endowment for the Humanities (2010), and recipient of two NEH Scholarly Editions Grants for his work as lead editor on two Herbert projects. His most significant publications include the following:

The Poetry of Immanence: Sacrament in Donne and Herbert (Toronto: U of Toronto P).
"George Herbert's Sacramental Puritanism" in Renaissance Quarterly and John Donne and the Metaphysical Poets (ed. Harold Bloom, New York: Chelsea House).
"Sacramentalizing the Word: Donne’s 1626 Christmas Sermon" in Centered on the Word: Literature, Scripture, and the Tudor-Stuart Middle Way (Newark: U of Delaware P).
The Digital Temple: A Documentary Edition of George Herbert's English Verse (Charlottesville: Rotunda, U of Virginia P).

He is currently working on a scholarly edition of George Herbert's English prose, and Latin and Greek poetry.