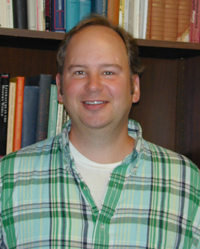 Having published widely in top journals ranging from Shakespeare Yearbook to Renaissance Drama; from Prose Studies to Interfaces; from Disability Studies Quarterly to the Blackwell Literature-Compass Online, he is also the author of a monograph titled Time, Narrative, and Emotion in Early Modern England (Ashgate, 2009), and the co-editor of two essay collections, both completed with Allison P. Hobgood (Willamette University): the first, a special issue of the journal Disability Studies Quarterly, titled Disabled Shakespeares (free online at www.dsq-sds.org [29.4 Fall 2009]); and the second, Recovering Disability in Early Modern England (The Ohio State UP, 2013). David has given recent invited talks at venues such as the Eastern Washington University’s “Discussions on Disability” (2018), the University of Michigan’s “Early Modern Colloquium” (2014), and Willamette University’s “Liberal Arts Colloquium” (2012).

In addition to the Greco-Roman dramatic and epic material he regularly teaches for his “Honors 101— Antiquities” and “Honors 111— Shakespeare on Film” courses, he has recently led a number of graduate seminars for NMU’s English Department, as well. Some of his courses include:

David lives in Marquette, MI, with his wife (Vicki), his three children (Maddie, Henry, and Nate), a wild dog (Rozzy), and a funky tabby cat (Wedge); he is also a proud winner of The New Yorker magazine’s cartoon caption contest (#111).