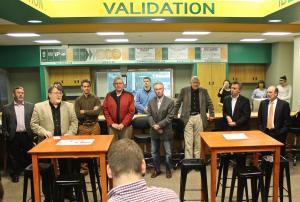 Invent'@NMU is housed in the former mBank building at 1400 Presque Isle Ave., across from Cohodas Hall. It welcomes students, individual inventors, start-ups and existing companies with innovative ideas, but who lack the experience and/or resources to fully execute the process. ​Full Story 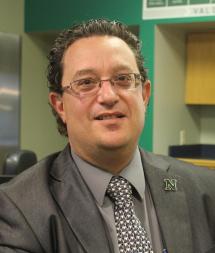 Joe Lubig (Education, Leadership and Public Service) has come up with a product idea that will serve as a pilot project for the Invent'@NMU team. His idea was motivated by a string of tragic headlines last summer about children and pets left unattended in vehicles and dying of heat stroke. Such casualties are preventable, but they continue to occur despite increased awareness efforts. Many experts have explained how quickly temperatures can rise to dangerous levels in a car and how rolling down the windows does not ensure safety. “I’m promoting an idea that focuses on keeping pets safe in these conditions,” Lubig said. Full Story 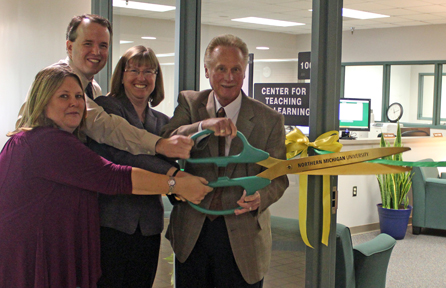 Center for Teaching and Learning Has New Space

The Center for Teaching and Learning has a new and larger space that reflects its broader mission. It is located in room 106 of the Learning Resources Center. The CTL will continue to support NMU’s instructional technology tools such as EduCAT, iClickers, podcasting/web conferencing and audio/visual equipment installed in campus learning spaces. But its emphasis has expanded beyond technology to a teaching-centric initiative that includes a suite of services to help faculty members more effectively design and deliver their courses.  Full Story 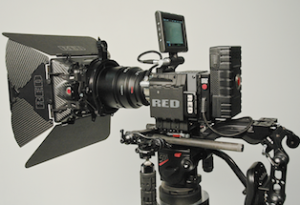 NMU digital cinema majors now have access to a camera and editing equipment that utilize the same 4K video technology featured in House of Cards, Gone Girl, The Hobbit series and other projects. The School of Art and Design recently purchased a $30,000 RED Scarlet Mysterium-X camera kit. It can be customized in various configurations to suit project needs and shooting styles—from handheld documentary styles to studio set productions. The camera also is capable of recording high-resolution RAW files. Full Story 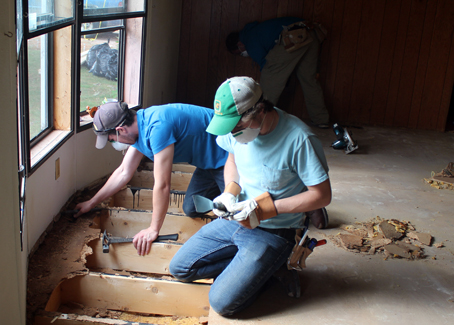 The NMU Volunteer Center and NMU constructors teamed up for the second annual veteran’s home improvement project supported by a grant from Wells Fargo. This year’s recipient, selected from seven applicants, was Charles Blake of Brookwood Lane in Marquette. He lives in a mobile home with his wife, Patricia, and son, Charlie.

The family stayed in a hotel last Friday-Sunday while the work was completed. NMU student and staff volunteers restored portions of the floor in the dining room, living room, kitchen and hallway. They removed the old floor coverings, tore out the degraded sections, re-sheeted and installed new bamboo composite flooring. Full Story

NMU alumni and students were well represented in the top three teams at the regional Code Michigan event held Oct. 3-5 on campus. The statewide competition to build mobile/web applications was held in three locations: Marquette, Detroit and Newaygo. Full Story 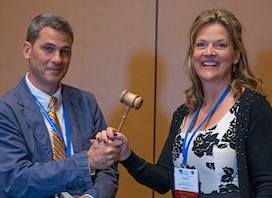 Tawni Hunt Ferrarini (Economics)  has been elected president of the National Association of Economic Educators for calendar year 2015. She is pictured receiving the gavel from former president Mike Raymer. The NAEE is the United States’ principal professional organization for the economic and personal financial education movement. “I am humbled and honored to be elected president by my professional peers,” Ferrarini said. “My primary NAEE goal is to support the centers and councils across the globe dedicated to advancing economic and personal finance literacy. We truly live in exciting times and it is a privilege to be part of an assertive network helping others make choices that historically lead to healthier and wealthier lives.” 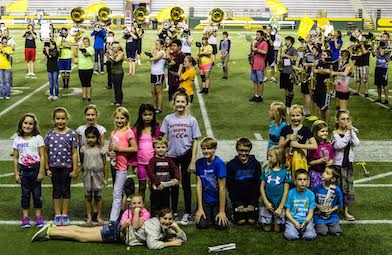 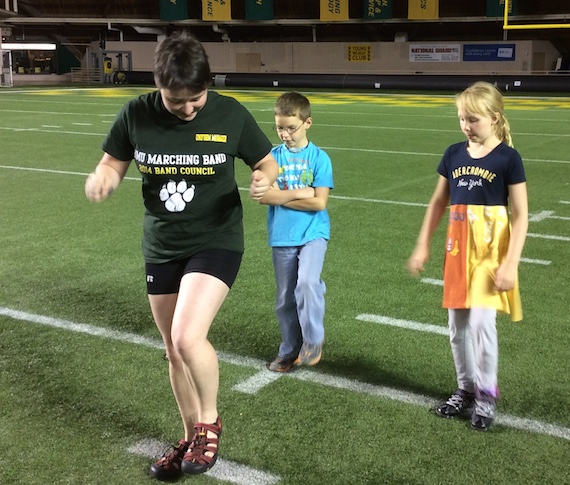 NMU students are making contributions to the Lake Superior Youth Theatre production of The Music Man. The NMU Marching Band demonstrated the proper techniques for movement with instruments during a session with cast members earlier this month on the turf at the Superior Dome. The goal was to lend some realism to the show, which is about a con man who goes to a Midwestern town with a scam involving a marching band program, but things don't go according to plan. NMU junior Natalie Berger is the staging director and acting coach as part of her community service internship through the Student Leader Fellowship Program. The Music Man runs Friday and Saturday (Oct. 17 and 18) at Kaufman Auditorium. 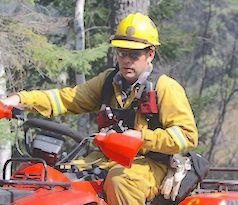 Students in Northern’s wildland firefighting program don’t have to question instructor Pete Glover’s credentials or whether his knowledge and skills are up to date. Glover actively practices what he teaches as a full-time fire supervisor with the Michigan DNR. He responds to Marquette County wildfires, but also answers nationwide calls for assistance when hot spots flare up elsewhere. Glover spent much of August in California helping crews battle the Beaver fire, which burned more than 32,000 acres, and the Happy Camp Complex fire, which is about 97 percent contained after consuming 134,000 acres.

“It would be impossible for a single agency to hire enough full-time, permanent employees within its budget to fight fires on that large of a scale,” said Glover. “So there are agreements in place nationwide which allow other agencies to send personnel and equipment over state lines as needed. That movement is facilitated by a national coordinating center in Boise, Idaho, and the hosting agency pays for travel, wages and expenses.” Full Story