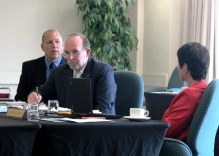 The NMU Board of Trustees today approved a 2014-15 general fund operating budget of nearly $108 million, a 2.4 percent decrease from last year. Final carryover balances from the previous fiscal year will be applied upon completion of the annual audit in September.

“Budget reductions are necessary in large part because of the projected decline in enrollment and associated tuition revenue attributed to declining high school demographics,” said Gavin Leach (Finance and Administration). For this and other action at today's meeting, read the Full Story. 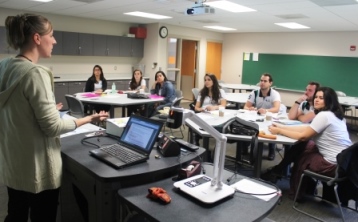 “As Brazil is increasing economically and starting more contact with foreign companies, it is more important to get skills in communication,” said student Helga Andrade, pictured far right during a session in Whitman Hall led by instructor Tiffany Comfort. “Even for the university research area, it is important to publish in English to improve universities and show more of what they do to the world. Many publish in Portuguese. They have to pay to translate papers. We are excited about having all of this information about business that this university brings to us and also to improve our English. This is the first international experience for most, except two of us. It opens the window to another view and culture.” Full Story A dedication and ribbon-cutting was held this afternoon for the Waino Wahtera Pavilion, located between Cohodas and Lee Halls.

The facility was made possible through a bequest from the alumnus, who earned his bachelor of science degree in 1940. It overlooks both Lake Superior and the Summit Street neighborhood where he was born and raised. Full Story 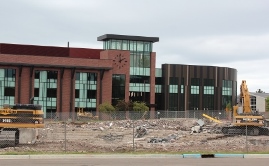 There is no need to distinguish between old and new Jamrich Hall anymore. Only one building by that name remains. The modern facility with its prominent clock tower is visible beyond the debris of its dismantled predecessor. Faculty will begin moving into their offices July 28. After the demolition site is cleaned up, it will be turned into a green space with turf, trees and a couple of connecting sidewalks. The intent is to mimic the look of the existing academic mall.

As crews were removing the concrete floor slabs of the old building, they discovered some of the underground piping associated with the air distribution system was not metal, but made out of a composite type material. "This material was sampled and test results indicate the presence of asbestos in this pipe," said Jim Thams (Engineering and Planning). "The material has not been disturbed and proper procedures for reporting and testing have been followed. The demolition contractor is able to continue to remove the overlaying concrete without damage to the buried pipe. Once the overlaying concrete is removed the material will be abated. This will take approximately two days and be complete by the end of next week." 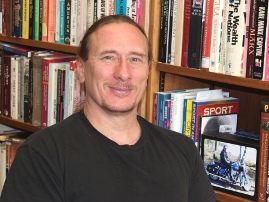 Gabe Logan (History) received a fellowship from the NMU Center for U.P. Studies to research a paper on the Labor Sport Union, an intriguing blend of left-wing politics and athletics that prospered throughout the iron ore region of Lake Superior from 1928-1935. Teams from several U.P. cities were among those competing in a variety of sports, from baseball and basketball to gymnastics and track and field. The LSU originated in Detroit and proliferated in other major population centers of America’s industrial heartland. Its goal was to strengthen American Communist Party activism by offering immigrant populations a working-class recreation alternative to elite “bourgeoisie” clubs, company-sponsored teams and the religious-backed YMCA/YWCA and Catholic Youth organizations. Full Story

Northern will become a tobacco-free campus on Friday, Aug. 1. Cigarettes, chewing tobacco and e-cigarettes will be prohibited from all campus areas. The only exceptions to the ban are public sidewalks and roadways that border campus and the NMU Golf Course.  Full Story