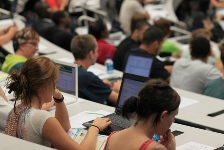 The NMU Board of Trustees today approved a 2014-15 tuition and fees schedule. The annual cost for full-time resident undergraduates will be $9,385, an increase of $291—or 3.2 percent—from last year’s rate of $9,094. NMU will maintain its longtime rank as having the second-lowest tuition and fees among Michigan’s public universities. For this and other action from today's meeting, read the Full Story.

NMU would receive an increase of 6.1 percent, or $2.5 million, in its state appropriation under the omnibus budget bill approved by Michigan lawmakers Wednesday. The package is awaiting Gov. Rick Snyder’s signature.

To receive the full amount based on the performance funding formula, universities must keep tuition increases at or below 3.2 percent. NMU fulfilled that requirement with today’s board-approved tuition and fees schedule (see related story above). Northern currently receives $41.7 million in operations funding from the state. Full Story 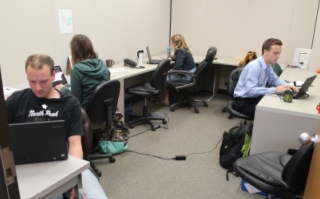 Michigan lawmakers approved a staggered increase of the state’s minimum wage. The first phase, which will raise the current $7.40 per hour to $8.15, takes effect in September. That will increase student labor expenditures at Northern by $577,000 overall (including auxiliary operations) and have a $275,000 impact on general fund operations. The legislation will ultimately bring the minimum wage up to $9.25 by 2018, with future increases tied to inflation.

NMU officials say it is too early to determine if or how the increased student labor costs will impact the number of on-campus jobs. According to Human Resources, about 1,600 students are employed during the academic year and the bulk of them receive minimum wage. Cumberlidge Part of Global Effort to Save Crab

Call them spineless, but never downplay their significance in terms of the planet’s biodiversity. Invertebrates—animals without a backbone—comprise 95 percent of all animal species and play a vital role in nearly every ecosystem. Despite their importance, invertebrates have been generally neglected in biodiversity conservation strategies, even though some populations have dwindled dramatically because of pollution or habitat destruction. This is now changing and invertebrates are increasingly being included in the International Union for Conservation of Nature’s (IUCN) Red List of Threatened Species.

In 2009, Neil Cumberlidge (Biology) led an international team of specialists that identified all of the world’s threatened freshwater crab species. Now he is part of a groundbreaking effort to rescue from extinction a “critically endangered” species from Singapore. Full Story 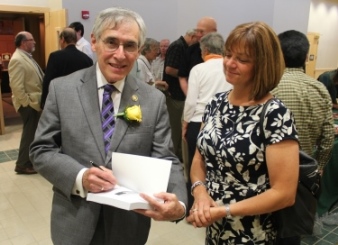 Longtime NMU professor and university historian Russell Magnaghi (History) has been honored with the release of a new volume of essays titled Northern Border: History and Lore of Michigan’s Upper Peninsula and Beyond. A public celebration was held June 4 with a reception and reading by four of the featured writers.

The NMU Press publication was compiled in the academic tradition of a “festschrift,” a collection of writing by colleagues, friends and students to honor a respected teacher. It marks Magnaghi’s 45 years on the NMU faculty. Full Story 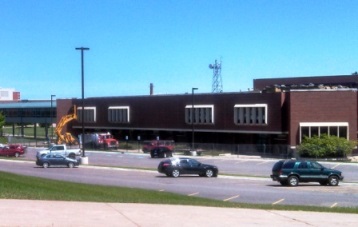 The demolition of the original Jamrich Hall will get underway Monday, June 16, starting with the connector to West Science. Demolition of the building itself is scheduled to begin a week later. Most of the furnishings have been repurposed elsewhere on campus or by area schools and community organizations.

Five other NMU buildings inherited classroom furniture from Jamrich Hall that was in better condition than what had been there. They included Thomas Fine Arts, Gries Hall, McClintock, the Jacobetti Complex and the PEIF. Also, 17 teacher stations were repurposed across campus and 10 placed in storage for future use. Full Story

Julie Rochester (Health and Human Performance) was inducted into the Michigan Athletic Trainers’ Society (MATS) Hall of Fame on June 6 in Ypsilanti. It is the highest award granted by MATS and recognizes certified athletic trainers (ATC) for activities, contributions and/or service which contribute to the enhancement of the profession of athletic training in the state of Michigan.

“This is very humbling and I am grateful for the recognition,” she said. “The best part for me is that a group of my students as well as former and current colleagues were involved in the nomination process.” Full Story