Board Sets Room and Board Rates

The NMU Board of Trustees today approved housing and dining rates for the 2014-15 academic year. The annual cost of a standard double-occupancy room and the “constant meal pass” option will be $8,742, an increase of $254 to offset inflationary cost increases for utilities, food, health care and contractual compensation.

For this and other action from today's meeting, read the Full Story.

The NMU Board of Trustees today approved a Faculty Voluntary Early Retirement Incentive Program. The program is being offered to faculty members 62 and older who have at least 10 years of service to the university. Sixty-five individuals are eligible. Full Story

The general education proposal passed the Academic Senate on April 22 and will be forwarded to Paul Lang (Academic Affairs) for his consideration. The senate voted on the general education piece with its eight measurable learning outcomes. It also voted separately on new university graduation requirements that students demonstrate competencies in written English and mathematics. These two will join the existing world cultures and lab science requirements. All pieces were approved with minor revisions that need to be incorporated in the final proposal sent to the provost. Full Story NMU participated in the Inside-Out Prison Exchange Program for the first time. The international effort provides opportunities for students in and out of prison to have “transformative learning experiences” that emphasize collaboration and dialogue as they address crime, justice and other social issues. Marquette Branch Prison approached NMU’s criminal justice department about implementing the program locally. NMU students met weekly with inmates at the prison and worked on proposed projects they displayed at last week’s closing ceremony (pictured). 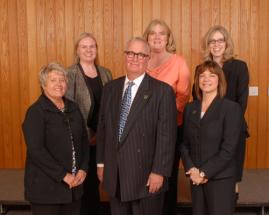 NMU employees were honored for years-of-service milestones at the faculty and staff recognition luncheon on April 22. Distinguished Team and Excellence in Service Awards also were presented.

The team award went to the group who coordinated data between the NMU Foundation Banner modules and the payroll Banner modules for automating payroll deduction pledge payments. Full Story

A Gender Working Group has been established at NMU. Members are developing a campus climate survey that will be distributed at the beginning of the fall semester, followed by focus-group discussions. These are the first concrete steps toward the group’s charge of identifying gender issues impacting faculty, staff and students at NMU and promoting gender equity through programming and policy initiatives. Full Story

The Michigan Area Health Education Center has launched its Upper Peninsula Regional Center, with NMU as the host partner. According to a press release, Michigan AHEC was established by Wayne State University in 2010. Its purpose is to enhance access to quality health care, particularly primary and preventive care, by improving the supply and distribution of health care professionals through community and educational partnerships. Through a statewide network of regional centers, Michigan AHEC prepares underrepresented and disadvantaged youth for health care careers, promotes clinical training opportunities for students in shortage areas and provides continuing education programs for health professionals. Congress created the national AHEC program in 1971. Full Story A Paper Tiger in the Rain by David J. Swanson (pictured) was selected from more than 150 entries as the winner of the Albert and Mildred Panowski Playwriting Award at Northern Michigan University. The competition is held biennially and this year’s theme was the economy.

The play revolves around Nathan, who has just been promoted to editor in chief of the Willow Falls Beacon Telegraph. Nathan learns that the newspaper is in financial trouble. As the situation worsens, he is faced with saving the newspaper while also trying to win the heart of his newly widowed former flame. Before it’s over, a young blogger named Ben helps Nathan through a painful lesson about waiting for impossible dreams and depending on false promises. Full Story

The NMU/Marquette County One Book One Community 2014 selection is Detroit: An American Autopsy by Pulitzer Prize-winning journalist Charlie LeDuff. NMU community members are invited to read and discuss the book. A number of related service, academic and entertainment events are being planned for the fall.

Here is a description of Detroit: "Back in his broken hometown, LeDuff searches through the ruins for clues to its fate, his family's and his own. Once the vanguard of America's machine age--mass production, blue-collar jobs, and automobiles--Detroit is now America's capital for unemployment, illiteracy, dropouts and foreclosures. While redemption is thin on the ground in this ghost of a city, Detroit: An American Autopsy is no hopeless parable. With steel-eyed reporting and righteous indignation, LeDuff shares an unbelievable, true story of a hard town in a rough time filled with some of the strangest and strongest people our country has to offer. Detroit is a dark comedy of the absurdity of American life in the 21st century, a deeply human drama of colossal greed and endurance, ignorance and courage."