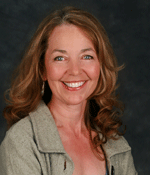 Dr. Shelley Russell, Ph.D., Professor – teaches a variety of courses, including playwriting and stage combat. She has directed over fifty productions including Beauty and the Beast, RENT, Romeo and Juliet, Peter Pan and Legally Blonde. Russell, who enjoys all aspects of the theater, has acted and sung in numerous productions, created dance and fight choreography, designed costumes and written plays and musicals which have been honored by the Jane Chambers Playwriting Award Competition, the Kennedy Center American College Theater Festival, the National Endowment for the Arts and the State of Michigan. Dr. Russell also served as executive director for the Lake Superior Theatre and in 2011 Dr. Russell was honored by NMU with the Distinguished Faculty Award. Her dramatic works include Holdin’ Our Own, a drama about the final hours of the lake boat, Edmund Fitzgerald, and a musical trilogy of works based in the Upper Peninsula, Beacon on the Rock, Haywire and Points North. But the common thread is Lake Superior. Water, Woman, her most recent playscript, is set for performance at the INvisible Theatre in Boone, N.C. for summer of 2015. As her work suggests, her commitment to the region’s natural resources and to women finding their voice in environmental protection is unwavering.