The building's namesake, Forest A. Roberts, was born in Tabor, Iowa, on October 15, 1901. He received his education at Graceland Junior College (1919-21) and State University of Iowa (1921-23) where he received his bachelor of arts and master's degrees. He also took graduate courses at the University of Wisconsin (1930) and the University of Southern California (1940-41). He married Esther Ruth Salter of DePere, Wis., in June 1925.

Prior to coming to Northern, he taught at Graceland Junior College (1923-27) and J. Sterling Morton High School in Cicero-Berwyn, Ill., (1928). In the summer of 1928, he and his wife moved to Marquette, Mich., where Roberts began his tenure in the English Department at Northern Michigan University. Through his efforts, the university established the Speech Department, now known as Communication and Media Studies, in 1955. 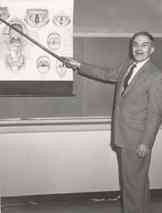 Roberts was selected as department head. Affectionately known throughout the Upper Peninsula as "Mr. Speech," Roberts was Northern's director of forensics (1933-38) and served as an official certification officer for the Michigan State Department of Speech Pathology (1943-64). He also established NMU's first courses in drama and directed many productions, which toured the Upper Peninsula (1928-43); he also acted in several roles. His last Marquette performance was in "The Snow Goose" in 1988.

While at NMU, Roberts was the faculty chair of the Alumni Relations Committee and a lifelong member of the Michigan Education Association, which culminated in a term on the MEA Board of Directors (1962-65). He was active in community affairs as a co-founder and president of the Marquette Community Concert Association (1936-39) and accepted many other community responsibilities.

In his retirement, the Roberts family maintained a home on Middle Island Point, where he

and his wife spent their summers. She died in 1993.

NMU honored Roberts on several occasions. On May 31, 1969, the Little Theatre was renamed in his honor. In 1987, he was awarded an honorary doctorate of Humane Letters. Later, the Forest A. Roberts Scholarship was established in his honor.

Roberts passed away March 28, 1997. During a memorial service for Roberts in the summer of 1997, a bronze plaque and portrait made in his honor were placed in the lobby of the theatre.