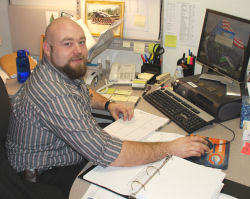 My plans for post graduation started about two to three months before the actual event.  I was scanning through a job posting website for government jobs (www.usajobs.gov) , only to realize that all of the social work jobs posted on that site required an MSW degree.  So I called a human resources representative at the VA medical centers in Battle Creek, MI to see if there were any openings that a person with a BSW degree could fill for the VA.  I was informed of a brand new position in the VA system called“Peer Support Specialist.”  The job didn’t actually require a degree of any kind but it did require some personal experience with mental illness and/or substance abuse.  I have had some experience with both, so I went through the application process.  This was a major task in and of itself because there were so many forms to fill out and different papers to send as well as some questions the VA likes to call KSA’s or Knowledge Skills and Abilities questions to screen for more qualified people.

While I was waiting to hear from anyone,  I kept calling the human resources person that initially gave me the information to check on the progress of the application and to get an idea of when to expect any kind of information.  I was not aware of the lengthy process that the application goes through;  in the meantime I had graduated, still with no real word on how far my application had gone.  I was getting a little concerned but had applied to a part time MSW program with Grand Valley State University that is offered at Lake Superior State University.

About a month after graduation, all of the information came at once from getting an interview with GVSU to setting up an interview with the VA..  It was very exciting and worrisome all at the same time because I had no idea which one was going to work for my family and me.  Of course I wanted a job, but on the other hand I wanted to further my education.  So I decided to wait them both out and attend both interviews, which were separated by about seven hours of driving each. The interviews were intimidating in a way because I didn’t know exactly what to expect, but both seemed to go very well.

Walking up to the VA building was very daunting because the Federal presence surrounds you, and from being in the military before, I felt a little of that awesome authority all around me once again.  It’s a feeling that I thoroughly respect and enjoy to be a part of.   Initially, the interview was quite structured; all of the questions were written down so that they could ask the same exact questions to each interviewer.  After the interview the interviewers asked a lot of questions about how I was going to move down here and they even started telling about good places in the area to look for apartments or houses. So it went very well.  It took about two to three weeks before I heard back from the human resources person who offer me the job.  Of course I said yes!

As I stated, I was hired into a new position called Peer Support Specialist; it’s part of a new program, the Wellness and Recovery Center or WRC as we call it.  Because it is so new, it has been difficult at times to try to explain what it is I am going to do as well as what the new program is going to do—especially for a program housed in the archaic and bureaucratic system of the VA.  So far I have traveled to three different places for training—something quite rare for other staff  here at the Battle Creek facility, and I have just finished a first draft of programming for the groups that I am going to be doing on a regular basis.  This task is something that I was not expecting, but everyone’s help was tremendous and caring to the point that if I had any problems or concerns there was help from everyone.  I have had to come up with enough group material for fifteen different groups a week and plan each one for an eight week schedule.

The groups that I designed had to be made for consumers of mental health services to help reintegrate them back into the community after being hospitalized.  Our target population is this group of hospitalized veterans, and the really cool thing is that there is no time limit on the length of services that they can use the WRC.  The WRC is providing services that are based on the Recovery Model of Mental Health, which stems from the Presidents New Freedom Commission for Mental Health 2003.  Although this idea of the Recovery Model is brand new to the VA system, it has been used in other civilian mental health agencies around the US for about the last fifteen to twenty years.  This is a very exciting time for mental health services throughout the VA but we have a lot of work ahead of us as well.  Our program actually has not started running yet but it has been a good time to train for the job and get to know how other services have been working around the VA Medical Center.  We are anticipating on getting started around the end of September and look forward to receiving our first consumers.  The WRC is an outpatient setting were we are going to provide peer support groups, recreational groups, life skills groups, among many other services that we are planning to provide such as helping consumers register to vote, live in their own apartment when they have been living in Adult Foster Care Homes or even homeless for the past many years.

I am planning on taking a year off from school since the last couple of semesters were brutal, but I am planning on applying to Western Michigan University in the Spring of 2008 for the Fall semester but I am going to take my time and keep the job that I have with the VA because it has been brought to my attention that it is about a $20,000 jump per year once I get the MSW degree.  One of the benefits of being in this geographic location is that there are several MSW programs nearby. The WMU program appears to fit my needs well.

I am grateful for the population that we serve and for the job that I have been blessed with and I will provide updates as things progress.  The BSW from NMU has helped tremendously in preparing me for the trainings that I have had so far.  Many of the other peer specialists that have been hired at other VA’s do not possess a degree, so it has provided me a jump start in serving the future consumers of this program.  It has also helped me when it comes to documentation and understanding what some of the clinical professionals are talking about.  For instance I had the opportunity to shadow an LMSW in one of the locked psychiatric wards and was able to understand what the treatment team was talking about during their meetings.  I feel that I have been well prepared for the job that I am going to be doing and then some.

I have also tried to get on a team of professionals that go to different Marine and Army National Guard and Reserve Units to screen returning soldiers as well as let them know about the services that they are entitled to receive.  As a veteran myself, serving this population is a burning passions  in my heart for my career, and I’m look forward to developing the opportunity that I now have through my education and employment with the VA.