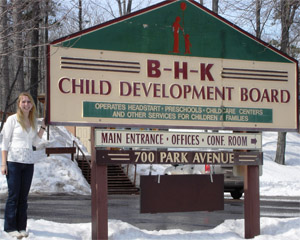 My timing seemed terrible. Graduating in December 2008 was hardly the best time in history to find a job! I was so worried that I wouldn’t be able to find a decent job—let alone one that would allow me to use my degree.

I had already interviewed for a couple of jobs during my last semester, and had received at least one rejection letter after an interview with BHK Child Development Board, in Houghton, Michigan. That was on top of the countless rejection letters from agencies that had only viewed my resume and cover letter without even offering an interview. I had hoped everything would work out, but there was a part of me that was very afraid that I would be unemployed forever.

My last day of school came and I packed up my things and moved home. I had interviewed for a position as a mentoring coordinator at an agency located in Negaunee, Michigan, before moving, and a few days before Christmas I got the call asking me to come back for a second interview. After the second interview I was very hopeful and thought that I had that job in the bag. January 14th was the day that I was supposed to find out for sure. As I was waiting for the call, my cell phone rang, but it showed a phone number that I didn’t recognize. It was from the BHK Child Development Board, the very agency where I had interviewed and been rejected before. The person originally hired for the position had to resign, and now I was being suggested for the job. It would require board approval, but they could let me know the following Tuesday. A few hours later, I got the call from the agency in Negaunee saying that they wanted to offer me a position as well!  So in one day, my job search went from worrying about no job to wondering which one to take.  In the end, I opted for BHK Child Development Board on began working February 2nd, 2009, as their 0-3 Family Support Specialist.

As the Family Support Specialist I provide in-home or center-based services to families who are involved with the BHK Head Start, Early Head Start, and Even Start programs. The 0-3 piece of my title means that the families that I work with are either expecting a new child or they have a child who is under the age of three. I work with families in Baraga, Houghton, and Keweenaw Counties here in the Upper Peninsula.  The job includes everything from parenting, relationships, anger management, stress management, budgeting—pretty much anything  where they could use some additional support. I also refer them to other services, such as counseling, if more help is needed. Another part of my job is to facilitate groups for some of our Even Start participants. Most of the group members are working toward earning a GED; I address topics ranging from healthy relationships to parenting and job readiness. My groups are essentially educational groups, but there is also a support group aspect to it. I never thought that being a group facilitator would be a part of any job that I would ever want to have, but I am definitely glad that we were able to practice being a group facilitator during classes in the social work program! I am just over a month and a half into my new position, and I already have five families that I am working with.

One interesting observation is that the person originally hired for this position was a master’s level social worker, while I am a BSW. I think this part proves that there are jobs out there for Bachelor’s degree social workers, because the agency was willing to hire me based on the BSW and my prior work experience after working with social workers at other educational levels as well.

If I was to offer any advice about finding a job after college, it would be to get as much experience in the social work field as you possibly can before you even attain your degree. Prior to obtaining my degree, I had experience as a nursery attendant and in a domestic violence program. It is definitely helpful to have solid experience to relate to while on the job, and it will be more helpful to answer interview questions if you can draw from past experiences. Also, don’t get discouraged if you receive a lot of rejection letters. The right job will come your way; it just may take some time. Also, if you are indeed offered a position and have the option of thinking it over, do so. It will help you make the best decision for you.     For more information about BHK, including employment opportunities, please visit the BHK website.