The Glenn T. Seaborg Center for Teaching and Learning Science and Mathematics at Northern Michigan University is named in honor of Nobel Laureate Dr. Glenn T. Seaborg, a native of the town of Ishpeming in Michigan's Upper Peninsula.

Glenn Theodore Seaborg was born on April 19, 1912. When he was 10, his family moved to Los Angeles, where he graduated as valedictorian of his high school class in 1929. He received a bachelor's degree in chemistry in 1934 from the University of California Los Angeles and a doctorate in chemistry from the University of California, Berkley, in 1937.  He remained at UC Berkley for most of his academic career.

In 1941, at the age of 28, Dr. Seaborg and his research team at Berkley discovered element number 94 in the transuranium series, now known as plutonium. He continued his research in this field and is credited as co-discoverer of all subsequent transuranium elements through number 102. Element 106 is named seaborgium in his honor. 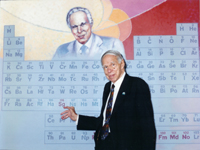 In 1942, Dr. Seaborg joined the Manhattan Project, working at the University of Chicago Metallurgical Laboratory under the direction of Enrico Fermi. His work in extracting plutonium-239 was a necessary step in the development of the atomic bomb.

In 1946, Dr. Seaborg assumed responsibility for directing nuclear chemical research at the Lawrence Radiation Laboratory, operated for the Atomic Energy Commission (AEC) by the University of California at Berkley. Also in 1946, he was appointed by President Truman to be a member of the AEC's first General Advisory Committee.

In 1951, Glenn T. Seaborg and Edwin M. McMillan jointly received the Nobel Prize in Chemistry "for their discoveries in the chemistry of the transuranium elements." He served as a professor of chemistry at UC Berkley until 1958 and then served as chancellor from 1958-61.

In 1961, he moved to Washington, D.C., to become chairman of the Atomic Energy Commission. He remained at this post for ten years and became an advocate for the use of nuclear energy for peaceful purposes. He served on the Scientific Advisory Committee for 11 United States presidents from Franklin D. Roosevelt through Bill Clinton.

Seaborg participated in President Ronald Reagan's National Commission on Excellence in Education at which produced the report "A Nation at Risk."  He published more than 200 scholarly articles and had a major impact on the reorganization of the Periodic Table of Elements. In 1991 he received the National Medal of Science, the United State's highest award for scientific achievement.