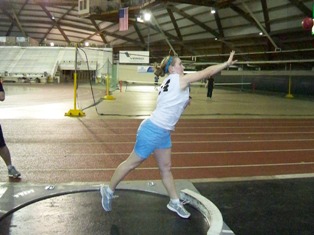 Military Science Cadets had the chance to add an international spin to their career skill achievements this February. Ten cadets competed for the German Armed Forces Proficiency Badge (GAFPB), an arduous, extremely demanding physical test which is said to test “the athletic ability of a soldier.” Cadets can win gold, silver or bronze and can wear these badges on their class A uniforms or dress uniforms, for the rest of their careers.

Indiana University hosts this prestigious event and cadets in programs across the Midwest have the opportunity to complete these rigorous trials. Nine events span three days of grueling physical tests and cadets must pass every event to win a badge proving their skill. Events include a 200 meter swim, shot put, a first aid test, a high or long jump, a pistol shoot and two runs – not to mention a 12-18 mile ruck march, in which cadets carry a 22 pound rucksack and march for hours. Cadets in the Wildcat Battalion at Northern Michigan University trained six days a week in preparation for the trials. 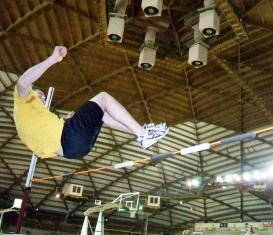 “The Wildcat Battalion is an officer training battalion,” said Sergeant First Class (SFC) Joseph Wright of the Military Science Department. “We train civilians to become Army officers and leaders.” Not all cadets are expected to compete for the GAFPB, explained SFC Wright. “The cadets that want to compete can. One cadet is assigned to be in charge and he or she will assume the position of captain and make the training schedule and conduct the training for the competition.”

This is the third year Northern’s ROTC cadets have participated, and Wright explained the competition is specialized. “It takes a German official to run and present the awards, so a German Sergeant Major (SGM) goes to Indiana University from Fort Knox, KY. While he’s there, they conduct the competition.” Cadets are not expected to pay their own way for the event either. Wright said, “The entire trip is financed through the Army. We pay for lodging through our cadet fund, which they [the cadets] do fund raisers for. It’s how they pay for energy drinks, power bars, etc. and how they paid for their hotel rooms.”

Walter Hanson, a cadet in the NMU ROTC program, participated in this year’s competition. “When I was starting [in ROTC], our school had never been invited before. I ended up going to basic training and found out about the competition.” 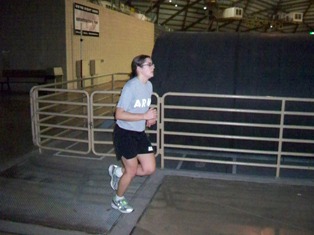 Cadet Hanson said the group left on a Thursday and spent the night in Chicago, due to the nine hour drive to Indiana University. The event lasted for three days. “The first day was the swimming event,” Hanson said. “Day two we woke up, ran the 5K, competed in the pistol shoot, then went for first aid testing. After that we did all our field events: the shot put, high jump and long jump, then went to sleep. On the third day, all cadets competed in the 30K ruck march, where cadets are required to run with a 22 pound rucksack for the duration of the race.”

Cadet Hanson admitted the event was rigorous, but said he enjoyed the competition. “It was fun and challenging for everyone,” he said. “There’s always one event that you’re worried about, but I liked competing.”

In 2007, NMU’s Wildcat Battalion sent six cadets to the GAFPB, and saw four cadets return with gold and two with silver. This year, seven out of ten received awards - three bronze, two silver, and two gold.