Northern Michigan University's first homecoming celebration was held October 25-26, 1935. The original homecoming festivities included a pep rally, dance, parade and a bonfire to cheer on the football team prior to the homecoming game. Though an earlier attempt had been made to get alumni together at the NMU-Michigan Tech football game in 1924, the event did not become an annual tradition for another 11 years. Through the years, homecoming has been an exciting ritual at Northern meant to bring current students and alumni together for a week of activities celebrating their Wildcat spirit. Homecoming has been held each fall, except between 1943 and 1947, due to World War II. 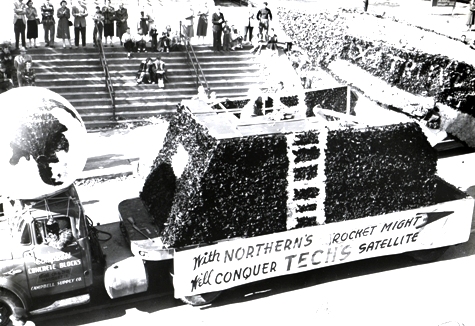 In addition to the traditional student competitions, Homecoming has been the stage for a number of record-breaking attempts. On October 6, 1977, 1,674 NMU students participated in a giant game of musical chairs at Memorial Field (where the Berry Events Center now stands), temporarily breaking the Guinness Book of World Records' statistic of 1,082 participants. In 1978, students again dazzled spectators when a three-man Pasty Planning Commission unveiled what was considered the "world's largest pasty" - a monster pasty consisting of 250 pounds of beef, 400 pounds of potatoes, 75 pounds of carrots and 25 pounds of onions wrapped in 250 pounds of dough.


Back to Homecoming homepage.