"Afterward, he tried to reduce it to abstract terms, an accident in a world of accidents, the collision of opposing forces – the bumper of his car and the frail, scrambling hunched-over form of a dark little man with a wild look in his eye – but he wasn’t very successful.” The first sentence of T.C. Boyle’s controversial novel propels the reader into a conflict that is one of the most current issues at the forefront of the political arena, the controversy over illegal immigration. Topanga Canyon is home to two couples; one searching for their vision of the American Dream, the other trying desperately to save it.


Los Angeles liberals Delaney and Kyra Mossbacher lead an ordered sushi-and-recycling existence in an exclusive, hilltop neighborhood overlooking the canyon. Camped out in the ravine, Mexican illegals Candido and America Rincon desperately search to find work and an apartment before their baby is born.

From the moment a freak accident brings Candido and Delaney into intimate contact, these four and their opposing worlds gradually intersect in what becomes a tragicomedy of error and misunderstanding. T.C. Boyle confronts not only immigration but social consciousness, environmental awareness, crime, and unemployment in a tale that raises the curtain on the dark side of the American dream.

—From the book jacket of The Tortilla Curtain and ReadingGroupGuides.com)

About the Author: T.C. Boyle 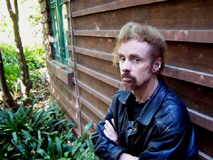 T.C. Boyle is the author of The Inner Circle, Drop City (a finalist for the National Book Award), A Friend of the Earth,Riven Rock, The Tortilla Curtain, The Road to Wellville,East Is East, World’s End (winner of the PEN/Faulkner Award), Budding Prospects, Water Music, and seven collections of stories. In 1999, he was the recipient of the PEN/Malamud Award for Excellence in Short Fiction. His stories appear regularly in major American magazines, including The New Yorker, GQ, Esquire, and Playboy. He lives near Santa Barbara, California. Boyle's fiction is known for its wit, biting satire, historical sweep and verbal pyrotechnics.

—From the book jacket of The Tortilla Curtain

Special Tortilla Curtain Themed Events in October:
ALERT! Find out more about H.R. 6061, "The Secure Fence Act of 2006" and other immigration issues at the Library of Congress Web Site