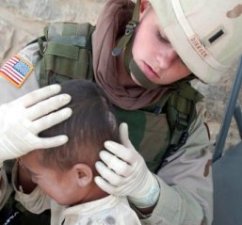 Note:  Prospective nursing students who desire to apply for the National ROTC Scholarship (Nursing Option) may only apply to universities with "Direct Admit" nursing programs.  NMU is not a direct admit program as nursing prospects are not accepted into the nursing program until nursing prerequisites are met.  This is typically accomplished during freshman year with admission to nursing being announced in the fall of sophomore year.  The only direct admit program in Michigan, currently, is the University of Michigan.

Prospective Nursing students and students accepted to the NMU Nursing Program may participate in the ROTC Basic Course (freshman and sophomore years).  Upon acceptance into NMU's nursing program, nursing students may be considered for the ROTC Nursing Scholarship, should funding be available, and the opportunity to serve as Active Duty Army Nurses.

Nursing students who do not receive an ROTC Nursing Scholarship may be considered for commissioning as an Army Nurse based upon expected vacancies in the Army Nurse Corps.

Students who are not successful in gaining admission to NMU's Nursing Program, or who elect to pursue other academic majors, may continue to participate in ROTC and are eligible to apply for a Campus-Based Scholarship or other Army tuition assistance.  All who successfully complete ROTC may earn commissions in the Active Duty Army, Army Reserve or National Guard.

References to the National Scholarship on these pages are for informational use only.

Those nursing cadets who are awarded a National or Campus-Based ROTC scholarship also receive nursing-specific benefits in addition to those offered with the traditional scholarship. These benefits cover nursing school expenses, licensing examination fees, and more.

1.  Lab/clinical fees are reimbursable as a one-time fixed allowance
2.  ROTC will pay up to $600 for NCLEX-RN exam prep course after graduation
3.  First attempt NCLEX-RN examination fee (approximately $200) is reimbursed in full
4.  Guaranteed accession into Army Nurse Corps as long as cadet passes NCLEX-RN within 2 attempts

Interested in learning more about being an ROTC nurse cadet or a nurse officer in the U.S. Army?

Back to Pay for College