Hunt Hall is built on traditions, open mindedness, and friendliness. Hunt Hall is also a LEED certified complex and was completely renovated during the summer of 2008.  The students of Hunt create a fun and open environment for all and welcome new ideas and faces to the community.  Some of Hunt Hall’s well known traditions include annual camp outs, hiking trips, the Hunt Hall Talent Show, and the “Arctic Plunge”.  Great, lasting memories and good friends are a result of living in Hunt Hall. Hunt is all co-ed and is building 73 on the campus map.

Vision Statement: To be our best; best meaning always growing, bringing out the best in each other, hall-wide. Accepting a challenge, being fearless in the face of opportunity, and having a good time doing it.

Mission Statement: Hunt Hall wants to expand our family, while exploring ways to help others achieve their educational, professional, and personal goals. We hope to welcome our residents into a diverse, open, spirited community.

Hunt Hall, opened in 1967, is named after Lucian Hunt, the former head of NMU’s Physical Science and Chemistry Department.

Hunt Hall was the first hall to have a co-ed house. It was on a trial basis at the time. 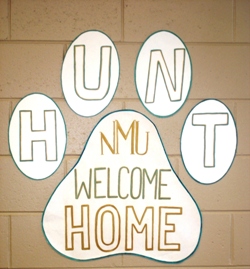 Lucas is originally from Sun Prairie, WI. He graduated from Northern Michigan University in May 2017 with a Bachelor's degree in Secondary Education with a Social Studies concentration. While at NMU, Lucas lived as a resident in Gant Hall, an RA in Payne Hall, and as a tenant in the on-campus apartments. He is now working towards his Master's degree in Higher Education-Student Affairs. In his free time, you can find Lucas playing video games, shooting hoops at the nearby courts, or discussing conspiracy theories. Come find him in his office or roaming around Spooner Hall to have a chat!

Hunt Hall Renovation Photos: See the progression of Hunt Hall throughout the Summer of 2008.