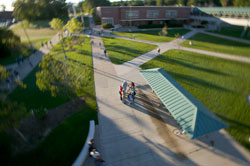 An early recommendation for an Honors Program came from the Committee on Undergraduate Programs and was presented to the Academic Senate in May 1967.  At that time little was done to develop such a program.  However, over the years the idea was discussed by both the faculty and administration.