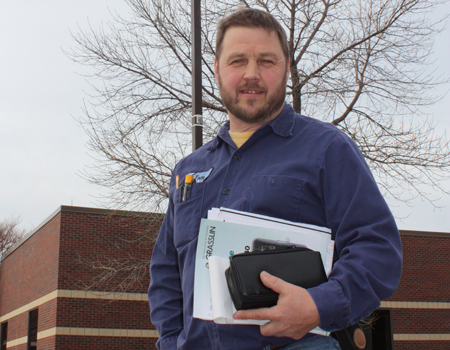 An NMU electrician’s idea to reduce exterior lighting levels on campus during low-traffic periods will save about $9,000 per year in energy costs. Tom Olson (Plant Operations) noticed that two parking lots serving the residence halls—lot 20 west of the Armory and 46 north of Wright Street—remained vacant over the summer, yet were fully illuminated each evening. He wondered if it might be possible to reduce their lighting levels from May through August to save money without compromising safety.

Urged to expand the idea beyond the two parking lots and beyond the summer period, Olson and fellow electrician Jeff Kyllonen analyzed how lighting is controlled in the core of campus and suggested other areas where it could be reduced overnight. They later joined officials from both public safety and engineering and planning in a lighting survey.

“We came in one night, reduced the lighting, took a reading of the levels and tried to gauge how the change would affect pedestrian safety”, said Jim Thams (Engineering and Planning). “Of 508 light poles on campus, we found that 122 could be programmed to turn off at 1 a.m. and back on at 7 a.m., when activity is lowest, while still meeting NMU’s minimum standard and exceeding the Illuminating Engineering Society standard followed by most municipalities. We have to buy time clocks to control the fixtures, but we’ll see a payback on that investment in less than a year. We should be ready to roll this out in a couple of weeks once the time clocks arrive and are installed.”

The locations where lighting levels will be reduced from 1-7 a.m. are: the Jacobetti Complex, lot 17 near Whitman Hall, north campus, the academic mall and the Hedgcock area. This program does not include reductions in any residence hall parking lots. The two locations that sparked Olson's original idea, lots 20 and 46, will be impacted only during the summer. NMU public safety also maintains an escort service to assist those who feel uncomfortable walking on campus during hours of darkness.

“This project is a great example of NMU putting employee suggestions to work to reduce energy costs. Three departments worked together to develop an idea that will provide real savings with minimal investment. I would encourage any employee with energy savings suggestions to submit their idea to gogreen@nmu.edu," said Kathy Richards (Engineering and Planning/Facilities).

Light bulbs are associated with good ideas, particularly when they flash on above a character’s head in a cartoon or comic strip. But in Olson’s case, it was the vision of turning off the light bulb that blossomed into an energy- and cost-saving idea.