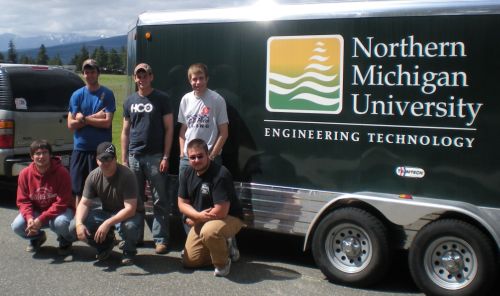 SAE Baja is an intercollegiate design competition run by the Society of Automotive Engineers (SAE). Teams of students from various universities around the world design and build small off-road cars with engines of the same specifications.  The goal is to design, build, and race off-road vehicles that are highly maneuverable and can withstand extremely harsh terrain.  The schedule of events at SAE Baja competitions includes a cost report, a design report, a design interview with judges, a technical inspection, a braking test, and short races including acceleration, maneuverability, hill climb, and rock crawl. The main event is an exciting four-hour endurance race in which cars are able to race at top speed over a motocross race track. 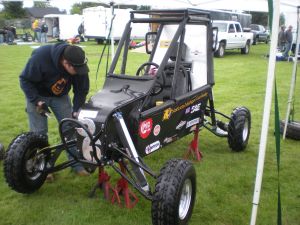 NMU students have participated in SAE Baja races in the past and continue to gain practical knowledge in the engineering field from these great experiences. This year, after competing in the short events, the NMU Wildcat Racing team looked forward to a good endurance race, but an unfortunate collision with two other cars resulted in a time consuming steering rack repair in the pits. As team sponsor Curt Tucker from Team Tech Motorsports put it, “that’s racing!”

“From observing other teams, our breakdowns in the pits, talking to race professionals, and the trip in its entirety, we learned a semesters worth of knowledge,” Matt Barbercheck stated. “If it's any compensation, I feel I learned more in the pits than I would have if we would have raced the whole time.”

The standard for vehicle maneuverability in SAE Baja competitions was raised in Washington. Eighty-five cars attempted the maneuverability course, but only thirty managed to complete the circuit without going out of bounds.  Seventy-five points were possible for this event, but fifty-five teams (including NMU) were not awarded any points.

Maneuverability was also tested in the two main events of the race: the Hill Climb event and the Rock Crawl event.

In Portland, Oregon, back in 2009, the Hill Climb event consisted of a straight line over rocks and logs. In Washington, however, the 2010 Hill Climb event tested the combined maneuverability, acceleration, and climbing ability of the Baja cars. 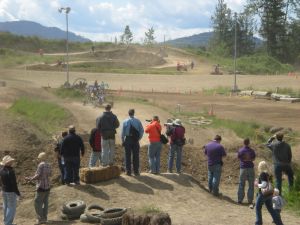 The course was not just a straight line like last year. The course was a maze of maneuverability - starting downhill, taking a steep climb with a tight left turn at the top, then continuing downhill with a 360 degree turn around a barrel at the bottom of the hill, and ending in a second steep climb.  NMU’s Wildcat Racing Team completed each part of the maze, except for the top portion of the last steep climb.

The Rock Crawl event was notable for featuring an emphasis on ground clearance, suspension travel, and maneuverability.  The course looked so rigorous that ten teams didn’t even attempt the event. Of the remaining teams who took a chance on it, only fifteen were able to complete the entire 530 foot long course. Sharp turns and a series of two feet high concrete walls spaced two feet apart trapped most cars before reaching the 400 foot mark. The trick of the trade was to carry enough speed through the sharp left turn which would enable the car to bounce along the tops of the concrete walls.

Barbercheck was positively influenced on the trip, as were his team members.

“Friendships were established and strengthened that I am confident will last a lifetime. Team management skills were required and improved. Expectations were fully realized and acknowledged.”

Barbercheck affirmed that through all the challenges, he can already tell how far the team has come, including many improvements that will contribute to the team’s success in the coming year.

The members of the NMU Wildcat Racing team would like to thank Northern Michigan University, Argonics, Team Tech Motorsports, and Bald Eagle-Harley Davidson for their donations; as well as thanking Eagle Mills Northwest Inc. for their technical support.

Matt Barbercheck sums up the 2010 Baja SAE Race out in Bellingham, Washington the best: “Maybe we didn't earn the $1500 first prize, but the prizes we did earn—the knowledge, the experience, the teamwork—can't be priced.”