Steve Mitchell of West Bloomfield and Thomas Zurbuchen of Ann Arbor were appointed to the NMU Board of Trustees today by Gov. Rick Snyder. Full Story 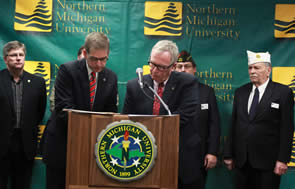 The Department of Military and Veterans Affairs signed a memorandum of understanding with Northern Michigan University, establishing the university as the host site for a new campus-based outreach service, MI-VetSuccess, a pilot program supporting student veterans. The initial program will reach out to almost 800 students who have recently served in the military and are now enrolled at higher educational institutions in the Upper Peninsula. Signing the MOU at the podium are Jason Allen, senior deputy director, DMVA, and NMU President David Haynes. Full Story

David Haynes is halfway through his inaugural year as Northern Michigan University’s president. He offers a review of the activities and achievements that have marked his first six months at the helm of his alma mater. Full Story

With the recent election, students in this semester’s “Politics and the Press” class have had plenty of opportunities to examine how the media covers the political process. They became well-acquainted with political fact-checking sites and studied related material in their textbook, Unspun: Finding Facts in a World of Disinformation. They have also reviewed research on the strengths and weaknesses of the process from non-partisan sources including the Pew Research Center, Annenberg Public Policy Center and Kaiser Foundation. Full Story

A Thai public administration professor who is on campus to observe NMU faculty and learn about comparative politics and government enjoyed being on U.S. soil to witness the recent election unfolding, both at a local polling place and in American media coverage. Kittipong Keatwatcharachai said “everything is different” compared with the election process in Thailand. He teaches at Sukhothai Thammathirat Open University, which has a memorandum of understanding with NMU and where Bill Ball (Political Science and Public Administration) has given guest lectures. Full Story 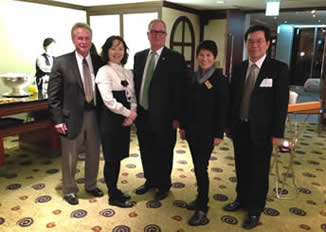 NMU has extended its global outreach efforts. NMU President David Haynes recently traveled to Seoul, South Korea, where he signed memoranda of understanding with two institutions: Seoul National University of Science and Technology and Hankuk University of Foreign Studies. This builds upon the previously signed agreement with Myongji University.

The Society of Automotive Engineers (SAE) Baja team opened its racing season with a second-place finish at the recent UW-Stout Backwoods Baja Endurance Race. It marks the best finish of all time for NMU’s SAE team. A field of 19 cars from universities nationwide competed in the four-hour, off-road race, which takes place on a motocross track and demands a fast, reliable car, skilled driving and great teamwork. Full Story