Gov. Rick Snyder has appointed Marquette residents Robert Mahaney and Tami Seavoy to the Northern Michigan University Board of Trustees. The eight-person board is the university’s governing body.

"I am confident Tami and Robert will bring great insight and ideas to the board. I thank them for their willingness to serve," said Snyder in a press release. Full Story

The NMU board honored outgoing trustees Stephen Adamini and Gilbert Ziegler, whose terms expire at the end of December. Each received a resolution highlighting his distinguished service to the university. For more information on this and other action from today’s meeting, read the Full Story. If you have not met Cleatius Gouldman, it is likely you have at least caught sight of him strolling across campus. He has a few uniquely identifiable features that distinguish him from most students: his signature sprawling white beard; his black MIA/POW cap that is weathered, faded and frayed on the edges of the brim; and a laptop bag bearing a few small splatters of paint that offer a subtle clue to his academic major.

Gouldman will graduate with a bachelor of fine arts degree on his 66th birthday. A long time has passed between his first classes at NMU in 1971, when he was fresh out of the military, and tomorrow’s rewarding march across the commencement stage. His education was interrupted by work, travel, music and art. Gouldman is a native of downstate Niles. He returned to Michigan in 1993 to care for his ailing mother. His final promise before she died was that he would complete his degree. Full Story 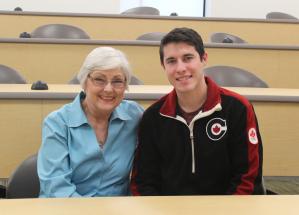 ​Negaunee Mother and Son Graduate Together

Diane Darlington plans to “get a big frame” for the NMU diploma she will earn Saturday, but jokingly debated with her son—and fellow graduate, Michael Darlington-West—whether it should hang prominently in the family’s living room. Her achievement may warrant high visibility. Darlington is 70 years old and managed to complete a bachelor’s degree in French at a full-time pace almost equal to her 23-year-old son’s. It timed such that both are marching in the same commencement. They even had a few classes together along the way and recalled with humor the awkwardness of sitting in the same row for a particular reproductive health presentation. Full Story Dana Verville of Portage, senior director of global sales excellence at Stryker Corporation, will be the keynote speaker at Northern's mid-year commencement on Saturday, Dec. 13. The NMU alumnus also will receive an honorary doctor of business degree. Verville has 27 years of experience with Stryker, a Fortune 500 medical technologies firm based in Kalamazoo. He has filled various roles of increasing responsibility and now oversees international marketing, marketing communications and sales training groups. Prior to joining Stryker, he began his career working as an account representative for Xerox. Full Story Recent national news coverage has focused attention on the use of force by police officers and stirred debate over whether their lethal responses to perceived threats were justified or excessive. In an effort to help students develop rapid problem-solving skills under stressful situations they may confront in their future law enforcement careers, Northern Michigan University’s criminal justice department has acquired a new use-of-force simulator.

“This is the first time a simulator has been used in a university program,” said Charlie Mesloh (Criminal Justice, pictured). Full Story Two NMU faculty members were honored at the annual Celebration of Excellence in Teaching and Scholarship on Dec. 4 in the University Center. Award recipients were Paul Truckey (Communication and Performance Studies) for excellence in teaching, and Nancy Maas (Nursing) for technology innovation. They are pictured center with (from left)President Fritz Erickson, Michael Broadway (Arts and Sciences), Kerri Schuiling (Health Sciences and Professional Studies) and Brian Cherry (Graduate Education and Research). Full Story The NMU Health Center has been designated a Site of Excellence for using the Michigan Care Improvement Registry (MCIR) to enhance the immunization process. MCIR was created in 1998 to collect reliable immunization information and make it accessible to authorized users online. Consolidating immunization records from multiple providers is designed to reduce vaccine-preventable diseases and over-vaccination, and allow providers to see patients’ up-to-date immunization histories.

​Puncochar Reports on Sabbatical in Indonesia

Judy Puncochar (Education) offered a progress report on her sabbatical in Indonesia. She is pictured with the U.S. Ambassador to Indonesia Robert Blake, whom she met at a reception at the U.S. Embassy in Jakarta. The event honored newly appointed executive director Alan Feinstein of the American Indonesian Exchange Foundation. AMINEF is a binational foundation administering the Fulbright Program in Indonesia that helps to develop academic collaborations. More than 1,000 Americans have been supported to research or teach in Indonesia since 1952 and more than 2,500 Indonesians have participated in graduate degree programs from American universities. Full Story 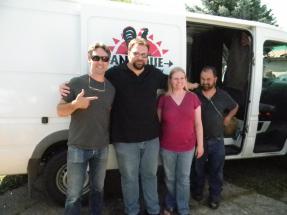 Lindsey Butorac (Human Resources) refers to herself with self-deprecating humor as “the time sheet nag.” She sends emails to NMU employees every two weeks, reminding them to record their time at the end of each pay period. These messages are more gentle nudging than nagging, but they are effective. Butorac and husband, Tyson, are pictured center, flanked by the cast of 'American Pickers.' They had a chance to meet the cast and crew during the filming of an episode featuring Tyson's aunt. Full Story