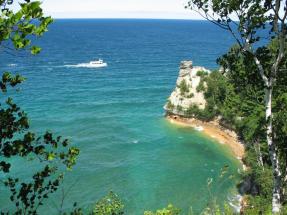 Northern is leading a collaborative effort to establish a coastal hazard observing system for a stretch of Lake Superior shoreline that includes the communities of Marquette, Munising and Grand Marais. The project is funded by a $100,000 grant from the Great Lakes Observing System.

As part of the system, project scientists will deploy two monitoring buoys on Lake Superior. One will be placed near Munising within five nautical miles of Pictured Rocks National Lakeshore. It will provide minute-by-minute observations of weather, water temperature and wave activity to boaters and kayakers. A second, more portable buoy will provide measurements of wave activity along various stretches of the Lake Superior shoreline, including Granite Island Light Station, Grand Marais and Whitefish Point. ​Full Story “For the duration we’ve been here, it’s been fairly positive,” Peterman said. “The goal is to build relationships with students and hopefully get them to see us in a different light than when we’re just passing through the dorms to respond to issues or problems. It’s a casual, friendly place where they can stop by and ask questions, get information, register their bikes or just say hi." Full Story Documentary Preserves U.P. Town's History
​Michael Loukinen (Sociology) has produced documentaries about a variety of topics—many with a Native American focus. But trying to make a film about a once-booming Upper Peninsula community that has diminished almost to ghost town status has proved his most daunting challenge. Loukinen’s goal was to produce a historical documentary about Winona, located nearly 30 miles southwest of Houghton. In the 1890s, Winona was a mining company town with “close to a thousand” residents who included immigrant copper miners. By 1920, the copper mines had closed and the town crumbled. Pictured is the King Phillip Location in Winona (circa 1906) and a current photo of the same location from the same vantage point.  Full Story

Northern has launched mini-marketing initiatives targeting 13 academic programs determined to have the most potential to increase enrollment for fall 2015. The effort will include program brochures, mailers, web marketing, traditional advertising and possibly event marketing. Full Story 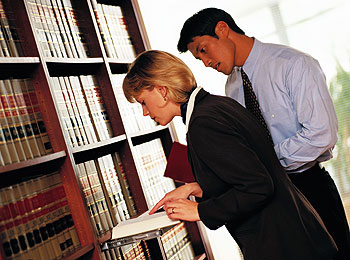 Several new academic programs were implemented at Northern this fall and are part of the marketing effort described in the preceding story. We will highlight each new program in CAMPUS, beginning with the paralegal baccalaureate degree.

Paralegals play a critical role in law firms, government agencies and corporations. They are qualified to perform many of the same functions as the licensed attorneys who supervise them—from researching relevant laws and compiling evidence to drafting court papers and formulating a defense. More clients are demanding the services of paralegals, when possible, to reduce fees. And more lawyers are confidently delegating important tasks to paralegals to save valuable time amid heavy caseloads. Full Story

Paul Johnston (Admissions) enrolled in Northern after high school because of its interdisciplinary environmental science program and location ideally suited to his outdoor recreational interests. An impromptu campus visit convinced him Northern was the right fit, so he promptly canceled a previously scheduled visit elsewhere. Before earning his bachelor’s degree, Johnston spent a few summers as a student intern with a global change experiment through the University of Minnesota. So how did he make the leap from science to student services and ultimately admissions?

“My quick answer to that question is, ‘People talk more than plants do,’” he said. “My first goal was to do research, get my doctorate and teach at a university. But through the internship I realized I was happy doing others’ research, but didn’t have a singular research interest of my own that I could see devoting the rest of my career to. I had conversations with a resident director while I was a student and became an RD myself after graduation. It was great watching students develop from move-in day to the end of their first year and to be completely invested in the student experience 24/7. But it’s also tiring because its high energy all the time. I knew it wasn’t a long-term job for me.” Full Story