November is Native American Heritage Month and this issue leads off with news of two timely and related achievements. To see the remaining schedule of activities for the month, coordinated by the Center for Native American Studies, click here. 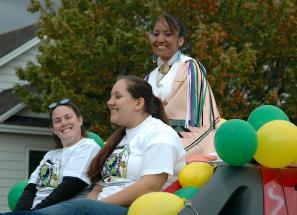 Northern has made another appearance on a “top colleges” list, but this one is geared specifically to the Native American student experience. “The 200 List” appears in the special college issue of Winds of Change, a magazine published quarterly by the American Indian Science and Engineering Society (AISES). The magazine has compiled information on 200 four-year colleges and universities “where American Indians are going to school in significant numbers and where the community, Native programs and support system are strong enough for these students to enjoy college and stay on to graduation.” ​Full Story 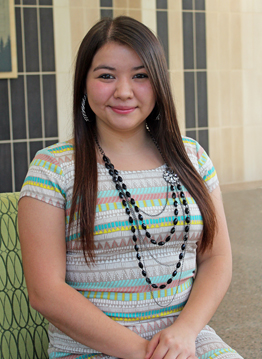 NMU physics major Biidaaban “Daabii” Reinhardt is one of 30 American Indian students nationwide selected to receive a Lighting the Pathway to Faculty Careers for Natives in STEM award from the American Indian Science and Engineering Society (AISES). The sophomore is in the Honors Program, president of the recently reactivated NMU AISES chapter and an active member of the Native American Student Association. Reinhardt is a citizen of the Sault Ste. Marie Tribe of Chippewa Indians. Her first name translates to “coming of dawn” in Anishinaabemowin.

Lighting the Pathways is a five-year pilot program funded by a $1.5 million grant from the National Science Foundation. It is aimed at boosting the number of AISES members in STEM disciplines (science, technology, engineering and mathematics), with the long-term goal of increasing the number of members who pursue STEM faculty positions. Full Story 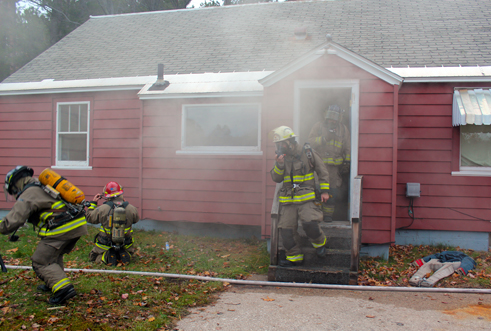 Two vacant NMU-owned houses bordering campus will be demolished sometime between Nov. 17-26. They are located at 1716 Schaffer Ave. and 2075 Sugarloaf. Before the latter home is taken down, the Marquette Fire Department is using it for training exercises this week and next. Firefighters are not burning the structure; only creating a smoky environment to simulate visibility challenges they may encounter and to practice a variety of operations and techniques.

Jim Thams (Engineering and Planning) said both homes are located adjacent to campus and had been identified in the 2008 Campus Master Plan as properties that could support future development. So when they became available several years ago, Northern acquired them. Full Story 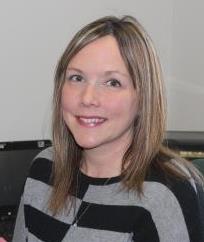 Mandi Roos (Nursing) is filling a dual role this year as full-time LPN instructor and one of the first students in Northern’s new Doctor of Nursing Practice (DNP) program. Adding graduate school to her teaching duties might have appeared overly ambitious, but Roos seems to be striking an effective balance, as evidenced by a recent achievement. She is one of 200 students nationwide selected to attend the American Association of Colleges of Nursing Student Policy Summit in Washington, D.C.

The three-day summit in March will offer an immersive experience in the federal policy process and nursing’s role in professional advocacy. It includes Capitol Hill visits, issue briefings and presentations on related topics.  Full Story NMU will celebrate International Education Week (IEW) with a series of presentations and an intercultural simulation exercise for faculty and staff about the challenges international students confront in the U.S. higher education system. All activities are being coordinated by the International Programs Office. IEW is a joint initiative of the U.S. Departments of State and Education to recognize the benefits of international education and exchange. Pictured is Varda Zafar of Pakistan, who is a student at NMU this fall and will give a talk about Pakistani weddings and the people who have inspired her to achieve her goals. Full Story

Marquette Ending Hunger, an NMU student organization, is teaming up with the 32nd annual TV6 Canathon to collect non-perishable food items for food pantries and to raise awareness about hunger in the Upper Peninsula. Collection bins will be located in every campus building, as well as many regional schools and businesses, from Nov. 10-Dec. 4. The effort will also include a residence hall competition, social media challenge and hunger awareness event. Full Story 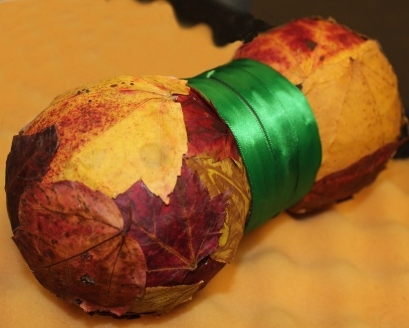 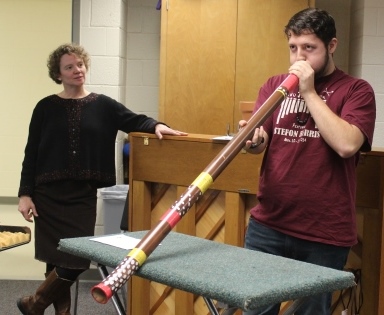 Students in a world music course taught by Carrie Biolo (Music) recently displayed and demonstrated hand-built instruments they created. The assignment was based on previous class discussions of music in various countries/cultures, from India and Ghana to Indonesia and Zimbabwe.

Biolo is pictured with a student playing his version of a didgideroo. The shaker covered with colorful fall leaves was among the 30 instruments students brought to the session. Full Story

Would you like to see your story and photo featured here? We are looking for NMU staff and faculty members willing to be considered for future profiles in this newsletter. The closeups are designed to better acquaint employees with those they may pass by or interact with on campus. They typically provide an overview of the employee's position at Northern, the path she/he took to get to NMU and interests or hobbies pursued outside of work. We would like to feature subjects from all employee groups. If something about you fits the "fearless" theme, great. If you lead what you would describe as a relatively "ordinary" life, that's fine, too. Everyone has a story to tell and we are looking for employees willing to share theirs. To indicate your interest in possibly being profiled, contact CAMPUS editor Kristi Evans at kevans@nmu.edu.