Northern Michigan University’s 10th day enrollment report shows a decline in total headcount from last fall, but a closer look at the numbers reveals positive strides in key areas. Officials expressed optimism that initiatives underway or in the planning stages will counter the negative enrollment trends that have impacted NMU, most Michigan institutions and many universities nationwide.

Northern appears in the top tier of Midwest universities in the 2015 U.S. News & World Report Best Colleges rankings, which were released today. NMU rates 30th among public schools in the region. Among the highest-rated 109 universities—public or private—in the Midwest, NMU is in a four-way tie for 91st. The regional categories include schools that offer many bachelor’s degrees, some master’s and a few doctoral programs. NMU’s School of Nursing is one of 100 nationwide selected to receive funding support to pilot White Coat Ceremonies, which are designed to instill a commitment to providing compassionate care among future health professionals. The selections were announced by the Arnold P. Gold Foundation and the American Association of Colleges of Nursing.

White Coat Ceremonies have been an important rite of passage at medical schools for more than 20 years, but this new collaboration between APGF and the AACN marks the first time a coordinated effort has been developed to offer similar events at schools of nursing. Full Story

The Uniting Neighbors in the Experience of Diversity (UNITED) Conference will be held Sunday, Sept. 28, through Wednesday, Oct. 1. NMU President Fritz Erickson will deliver the opening keynote at 11 a.m. Monday, Sept. 29, in the University Center Great Lakes Rooms. Other featured speakers and their topics are (all presentations in the Great Lakes Rooms): Motivational speaker Andres Lara (pictured), better known as the Cuban guy, who escaped from his native country at 16 and turned his life around within 10 years to become the person he is today. He will give a talk titled “How to Move Forward When You Feel Like Quitting” at 7:30 p.m. Monday, Sept. 29. For other keynote speakers and a link to the complete schedule, read the Full Story. 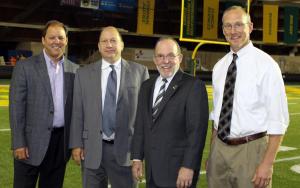 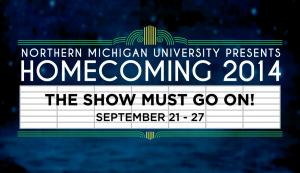 Northern’s 2014 Homecoming celebration is built around the theme, "The Show Must Go On." The week will culminate with the parade and all-alumni reception at the Landmark Inn on Friday, Sept. 26, and the new Homecoming community tailgate party leading up to the football game against Michigan Tech on Saturday, Sept. 27. Employees are invited to participate in the festivities. For a schedule of alumni/community events, visit Homecoming.