In his first convocation as NMU president, Fritz Erickson discussed his early impressions of the university, his desire to engage the full campus community in developing a useful strategic plan and the challenges and opportunities that lie ahead. He delivered this afternoon’s address in the 500-seat auditorium of the new John X. Jamrich Hall.

Erickson identified three qualities about Northern that have become most apparent since he assumed the post on July 1. The first is an enduring commitment to students. Erickson said that has been demonstrated at orientation and other activities, as well as in conversations with faculty and staff. The second quality is a deep commitment to community, whether in the form of collaborative research with colleagues or investing volunteer time and service off campus. Finally, Erickson described Northern’s “shy sense of excellence.” He said the reluctance to share and celebrate achievements has not served the institution well. ​Full Story.

Paul Lang (Academic Affairs) will step down from his provost and vice president position at the end of the 2014-15 academic year, according to an email distributed to NMU employees earlier this week. Lang has served as provost for three years. He joined NMU in 1997 as a professor of criminal justice and head of the department. He later served as head of the School of Technology and Applied Sciences and then dean of the College of Professional Studies. Full Story 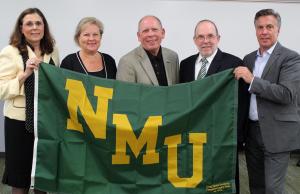 Northern Michigan University’s clinical laboratory sciences programs have received a $250,000 commitment, disbursed over five years, from the Cliffs Natural Resources Foundation. This is Cliffs’ largest gift to NMU. It will support the molecular diagnostics initiative.

Pictured at the presentation of an NMU flag honoring the Cliffs gift are (from left): Kerri Schuiling, dean of Health Sciences and Professional Studies; Linda Riipi, associate dean and director of the School of Clinical Sciences; Dale Hemmila, Cliffs director of public affairs, North America; NMU President Fritz Erickson; and Dave Bammert, NMU Foundation development officer. For more on the molecular diagnostics initiative and how the Cliffs funding will be used, read this story from a previous issue of CAMPUS. NMU students will be greeted by a new classroom facility when they return for the fall semester. As the original and outdated John X. Jamrich Hall was being demolished this summer, crews completed work on the new building that carries the same name. Planning for the $33.4 million project began in 2009 with the goal of “providing an efficient, state-of-the-art facility that improves academic delivery, maximizes building use and reduces overall operational and maintenance costs.”

The result is a 133,000 square foot mixed-use building with 24 high-tech classrooms and seven informal learning spaces designed to support collaborative learning and be highly adaptable to changing technologies and teaching methods. The largest space is a 500-seat lecture hall/auditorium that can be used for instruction, movie showings, prominent speakers and other special events. Academic departments that have moved to Jamrich are sociology and anthropology, social work, mathematics and computer science, criminal justice and English. Starbucks has also relocated there. NMU has registered the project with the U.S. Green Building Council and is seeking “LEED Silver” certification. Full Story An NMU student exchange program with two Brazilian universities ended earlier this year, but NMU has received an extension to use the remaining $50,000 from a U.S. Department of Education grant program to explore new collaborative initiatives in the country. Kevin Timlin (International Programs) said the funding, unspent by another U.S. university because of low student participation, will be repurposed. It will support NMU delegation visits to Brazilian universities, faculty/staff developmental grants and on-campus events that promote Brazilian culture. Full Story

Tickets are available for the 2014-15 Northern Nights performing arts series and the NMU mainstage theater season. Northern Nights will feature seven diverse performances by artists from India, Spain, Canada and the United States. The first event is Sumkali (pictured) on Saturday, Sept. 13. For more information on this group and the other artists, click here.

The theater production schedule kicks off with a playwriting award winner and includes the well-known musicals Chicago and Little Shop of Horrors. To see all of the mainstage and studio productions, visit the Forest Roberts Theatre website.