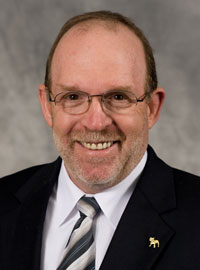 Fritz Erickson will be the 15th president of Northern Michigan University, effective July 1. The NMU Board of Trustees voted unanimously in favor of the appointment at a public session this morning. Erickson was one of four finalists for the position. He is provost and vice president for academic affairs at Ferris State University in Big Rapids.

Erickson is driving to Marquette and will be available to greet the campus community at 4 p.m. today in the Brule Room of the University Center.

“It means the world to Jan and me to have the opportunity to return to the Upper Peninsula and work at such a wonderful university,” Erickson said. “I am deeply honored to have been selected. I believe Northern has great faculty, great staff and fantastic students, and I look forward to being their president.”

Board chair Rick Popp said, “Fritz has the credentials and the right kind of personality and drive to help take Northern to another level. He has held many different key positions: teacher, professor, working up through the administrative ranks and now provost. In every job he’s held, he has succeeded. He has shown an ability to adapt and still help mentor and honor the processes in jobs he’s held. That will serve him well as he shifts from provost to president. He’s a great fit for Northern and we’re excited he has accepted. It’s a great day to be a Wildcat.”

Trustee Steve Mitchell, who was on the search committee, added, “I agree that the best candidate is Fritz. He’s a terrific guy, he has a background in recruitment and retention of students as well as community college programs and he’s grown enrollment while at Ferris. We heard from professors and a former board member at Ferris who gave great recommendations. One of the most important things we as a board do is select a president and I wanted to be on the search committee so at the end of the process, I didn’t sit here wondering, ‘Is there another person out there who would be a better fit?' In this case, the answer is no.” 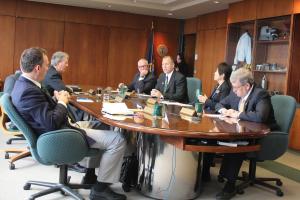 Erickson previously served as dean of the College of Professional and Graduate Studies at the University of Wisconsin-Green Bay, dean and professor in the College of Education and Human Development at Eastern Washington University and chair of the education department/ professor of education and psychology at Michigan Technological University. He holds an interdisciplinary Ed.D. in educational psychology, technology and research methodology and a master’s in curriculum and instruction, both from the University of Northern Colorado. Erickson received a bachelor’s degree in social sciences from Western Michigan University.

Terms of the contract were not part of the discussion or vote. The board agreed that Popp and trustee Garn Lewis will negotiate and finalize details of contract before bringing it to the full board for approval at a future meeting.

“The board is extremely pleased with how well the search process was executed,” Popp said. “The presidential search advisory committee did a fantastic job completing all of the groundwork required to select four highly qualified finalists for consideration. Each one proved capable of leading an institution. We also appreciate the level of engagement demonstrated by the Northern community during the campus visits and related feedback sessions. All of it contributed to a successful search capped off by Fritz accepting the appointment.”

NMU President David Haynes’ two-year term runs through June 30. He announced in December that he will return to the NMU faculty after that date.