Northern Michigan University will become a tobacco-free campus effective Aug. 1, 2014. The NMU Board of Trustees today approved work group’s recommendation that cigarettes, chewing tobacco and e-cigarettes be prohibited from all campus areas. These are all of the tobacco products defined by the American College Health Association.

The only exceptions to the ban would be public sidewalks and roadways that border campus, the NMU Golf Course and personal vehicles with windows closed, provided there are no minors in the vehicle. Native American and religious ceremonies are currently addressed in university policies. Full Story

The NMU Board of Trustees approved charters and start-up boards for three schools in lower Michigan, effective July 1. This brings the total number of NMU charter schools to 10.

Both the Frances Reh Academy in Saginaw and the George Crockett Academy in inner-city Detroit are K-8 facilities and were formally chartered by Ferris State University. When their contracts with FSU came up for reauthorization, they explored a new option with NMU and completed an intensive application process. Universal Leadership Academy in Port Huron is managed by Bold Education Connections and the Romine Group. It will start as K-5 and progress to K-8. For an overview of this and other action from today's meeting, read the Full Story.

Michigan’s public universities have a combined “economic footprint” of about $24 billion and are responsible for more than 120,000 full-time equivalent jobs statewide. These impacts are detailed in a new report by Anderson Economic Group that was commissioned by the Presidents Council, State Universities of Michigan. The report analyzed each institution’s local spending, earnings and employment. According to the most recent data from 2012, Northern Michigan University accounts for $227 million in spending. The bulk of that—$123 million—is attributed to students. NMU recorded earnings of $81 million and supplies about 1,300 jobs. Full Story Northern Michigan University’s human-centered design program partnered with longtime Menominee manufacturer Lloyd Flanders to develop concepts for contemporary woven furniture that might appeal to younger consumers. Students gained valuable experience working for a real-world client and tempering their creativity with the constraints of available materials, production methods and labor costs. Company officials appreciated the fresh perspective and imaginative uses for the trademark wicker material that is weaved on the original 1917 Lloyd Loom (pictured below) and hand-stretched over frames of aluminum tubing.

Students presented their final design concepts and prototypes at the company Dec. 4. They received constructive feedback on aesthetic value, practicality and manufacturing potential. Lloyd Flanders will select three to fine tune for its display at the International Casual Furniture & Accessories Market in Chicago. The pieces may also be shown at the International Contemporary Furniture Fair in New York City. Full Story

Game theory is described as a thoughtful, conversational procedure to analyze a competitive or theoretical situation. Participants work to identify the players and their possible actions and reactions, addressing the “what ifs” and “then whats.” NMU held a gaming session facilitated by an alumnus early this year targeting international recruitment. David Rayome(Business) attended and decided to adapt the format to focus specifically on the College of Business. The resulting session was held recently in downtown Marquette. Full Story 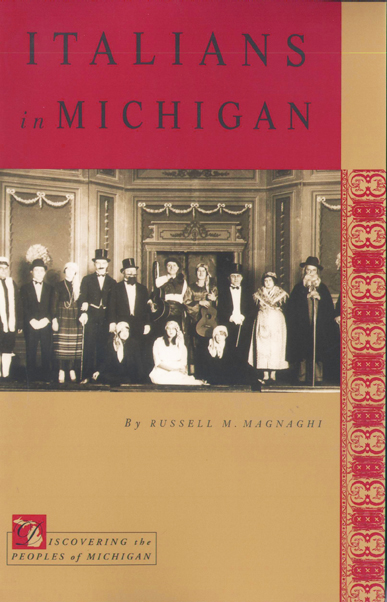 NMU faculty and alumni have contributed to a book series on the rich multicultural heritage of the Great Lakes State. The Discovering the Peoples of Michigan collection is published by the Michigan State University Press. It explores the unique contributions that varied and often unrecognized communities have made to Michigan’s historical and social identity. Russ Magnaghi (History) is the series editor. He said the MSU Press originally envisioned a single large volume with short pieces on the various ethnic groups, but he suggested a different direction for a more thorough treatment.

“I knew of a couple other states doing similar things, but with a series of smaller books dedicated to each group,” Magnaghi said. “That way more space could be devoted to each in terms of why they came to Michigan, how they settled in, their customs, the lodges or clubs that sprang up, the establishment of ethnic churches and newspapers and, of course, ethnic foods. We’ve seen a lot on Finns and also on Germans, who had a tremendous population in Michigan before World War I. But for many of these groups, little if anything has been written. The books are easy to digest. They’re written for a general audience and run about 100 pages.” Full Story

NMU has kicked off its annual United Way of Marquette County workplace fundraising campaign. This year’s co-chairs are Kathy Richards (Facilities) and Michael Broadway (Arts and Sciences). The campaign goal is $30,000. “We’ve raised about half that amount,” said Richards during a recent presentation to the administrative/professional union. “We got a later start this year—the campaign typically begins earlier in the fall semester—so instead of closing it at the end of the year, we will go into January. We hope employees carefully consider making individual contributions. Those gifts stay right here in Marquette County and help those who need it most.” The United Way of Marquette County funds more than 30 agencies. Pledge forms will soon be distributed via campus mail.

The NMU Foundation’s recent faculty/staff fundraising campaign, which ran Oct. 5-Nov. 21, generated $25,536. Since July 1, employees have contributed more than $80,000 to the NMU Foundation to assist students and programs. That is $30,000 ahead of the same period last year, when there was not a formal fall campaign.

Robyn Stille (Foundation) said NMU employees typically contribute about $124,000 annually (July 1-June 30), based on data from the last five years.  This number does not reflect donations to the public radio and television stations. Faculty and staff can participate at any time by making a gift through payroll deduction, check or credit card. They also can designate their gifts to the program or area of their choice.