Staph infections can range from mild skin problems to potentially fatal conditions if the bacteria invade deeper into the body. Most can be easily treated with antibiotics or by draining the infection. Some are drug-resistant. The faster the responsible bacteria can be identified, the faster the appropriate treatment can begin. This is the driving goal behind a new collaboration involving NMU biology researchers and Micro Imaging Technology Inc. of San Clemente, Calif. They are using the company’s MIT 1000, a laser-based bacteria detection system, to differentiate between the common Staphylococcus aureus and the “superbug” known as methicillin-resistant Staphylococcus aureus (MRSA).

Josh Sharp (Biology, pictured) is directing the NMU research on clinical applications of the MIT 100 system (short for Micro Identification Technologies). Undergraduate and graduate students are assisting in his lab. Full Story Northern may become a tobacco-free campus. President David Haynes appointed a work group in the summer to study the issue. The group has been meeting regularly to consider implications of such a change. In early November, a campus-wide survey will ask students, faculty and staff if they support the idea.

NMU already has a smoke-free policy for the interiors of all of its facilities and residence halls, and a 30-foot rule at facility entrances. Full Story 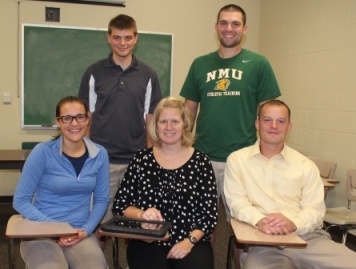 Most of Maggy Moore’s (HPER) recent research has focused on the human head. She studied the impact of migraines on physical balance and on the neurocognitive function in college students. Now she is recruiting hockey and soccer players ages 5-11 for a study that will define the parameters for the only computerized concussion evaluation system for children. She is pictured center with students helping with the concussion research.

Moore presented two papers at the September 2012 European Headache and Migraine Trust International Congress in London. Both were published in the Journal of Headache and Pain. One was based on her study that examined differences in dynamic balance between those who suffer from migraines and a control group of subjects who do not. Participants completed a clinical test of sensory integration and balance-tested stability with their eyes open and closed on both firm and foam surfaces over 30-second intervals. Full Story Those affiliated with NMU’s surgical technology program have two reasons to celebrate. The program has reached its 20-year milestone and it recently awarded its first bachelor’s degree. Surgical technologists play an integral role in the operating room. They ensure a safe and sterile environment, arrange equipment and support doctors and nurses during a procedure.

“The 20th anniversary is a testament to those who came before me,” said Rick Lopez. He has directed the program since 2009 after working at Marquette General Hospital and with the 107th Battalion of the National Guard, including its deployment to Iraq. “Kim Dunlap started surgical technology at Northern. Sandy Kontio helped her with the clinical portion and then ran the program for many years after Kim left. When Sandy retired, I was appointed. It began as a one-year certificate and expanded to a two-year associate degree. In 2009, we began offering a bachelor’s in clinical health science with an emphasis in surgical technology.” Full Story 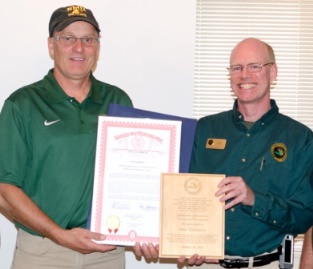 Sten Fjeldheim (Athletics), head coach of the women’s and men’s Nordic ski teams, has received the Partners in Conservation Award from the Michigan Department of Natural Resources and the Natural Resources Commission. He was honored for his work developing the Blueberry Ridge trail system and for volunteering to help groom trails each winter. He is pictured left with Doug Barry of the DNR.

Fjeldheim began collaborating with the DNR shortly after he was hired as NMU’s coach in 1986. He said the DNR was relocating the Blueberry Ridge ski trails from the west side of County Rd. 480 to a new location on the east side of the road. Full Story