NMU plans to fight the elimination of its 44-year-old Army Reserve Officer Training Corp (ROTC) program. NMU was notified that its program is one of 13 nationwide being eliminated in May 2015 and the only one in Michigan.

Since it opened on the campus, NMU has graduated nearly 400 students from its military science/ROTC  program. NMU currently has 65 ROTC cadets, 10 of whom are projected to be commissioned this year and another 14 next year. Northern’s program serves both U.S. Army and Michigan National Guard cadets. The surprise Army announcement will subsequently impact the Michigan National Guard by taking away a training and educational source. Full Story

Steven Neiheisel is the new vice president for enrollment and student services at Northern Michigan University. He will supervise the following offices: Admissions, Financial Aid, Academic and Career Advisement Center, Dean of Students, Counseling and Consultation Services, Housing and Residence Life, International Programs and the Center for Student Enrichment.

Neiheisel has more than 25 years of management experience covering similar areas of responsibility at several public and private institutions. He most recently served as assistant vice president for enrollment management at the University of Idaho. In addition to his expertise in enrollment management, he is a career advocate of using information and information systems to personalize services, increase efficiency and effectiveness, better target services and communications and improve decision-making. Full Story 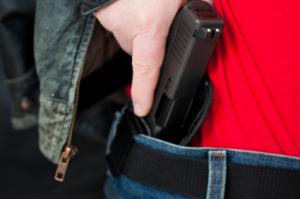 High-profile shootings at Virginia Tech, Northern Illinois University and elsewhere prompted some legislators to propose revisions to concealed pistol laws, allowing properly registered firearms to be carried on campus. The national organization Students for Concealed Carry also staged empty holster protests, including one at NMU, against state laws and school policies that “that disarm law-abiding citizens allowed to carry concealed pistols in other locations” by declaring universities gun-free zones.

In the wake of these events, Greg Warchol (Criminal Justice) and Dale Kapla (Administrative Affairs) completed a three-phase survey of attitudes about firearms on campus. They polled criminal justice majors specifically before expanding to the student body and ending with the faculty. Full Story. 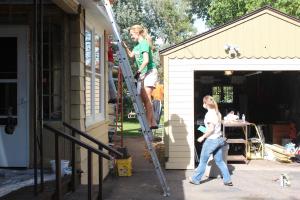 NMU student and staff volunteers took advantage of Wednesday’s ideal weather to continue a painting project at the Marquette home of World War II veteran Robert Peterson and his wife, Loretta. With support from a $15,000 Wells Fargo grant and volunteer assistance from the banking company’s local employees, the Petersons are receiving free upgrades to enhance the appearance and safety of their home. The new funding is an expansion of Wells Fargo’s longstanding support of the local Make a Difference Day activities coordinated by the NMU Volunteer Center. Full Story

The DeVos Art Museum will unveil two new exhibits on Friday, Oct. 11: “Illustrators 55: The Society of Illustrators Annual Travel Show” and “Rabbit Island: Works and Research 2010-2013.” An opening reception for both shows will be held from 6-8 p.m. Friday. It will include live music by Jen Koppin and a culinary collaboration between Nathan Mileski (Dining Services) and Chef Kelly Geary, former Rabbit Island chef-in-residence and chief proprietor of Sweet Deliverance in New York City. A featured artist talk with illustrator John Hendrix will be held at 7 p.m. Wednesday, Oct. 30. Full Story Popp Elected NMU Board Chair for 2014

Rick Popp of Northville Township will serve as chair of the Northern Michigan University Board of Trustees for the 2014 calendar year. He is an NMU alumnus and Iron Mountain native. H. Sook Wilkinson of Bloomfield Hills will be the new vice chair of the board.

Popp has been employed by Ford Motor Company for more than 23 years. After leading Ford’s human resources function in Mexico, he directed Ford’s employee benefits organization for the past six years, and was just recently named director of human resources for Ford’s Global Marketing, Sales and Service and Corporate Communications teams. Full Story

Karen Thompson Walker, author of the One Book One Community selection The Age of Miracles, will participate in two events at Northern Michigan University on Monday, Oct. 28. A question-and-answer session is scheduled at 2 p.m. in Jamrich Hall. An evening presentation and book signing will be held at 7:30 p.m. in the University Center Great Lakes Rooms. Both events are free and open to the public. Full Story