The rise in new freshmen helped to counter some of the exiting effect of one of the university’s largest graduating classes on record last spring. Their academic credentials also improved. The average ACT score is 22.9 and the average high school grade-point average is 3.17. Full Story 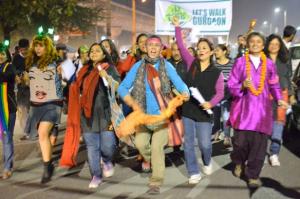 After spending the last academic year in India fulfilling her Fulbright Teaching and Research Award, Jaspal Singh (English, center) has returned to campus with a new honor for the year ahead. She is the 2013-14 Peter White Scholar at NMU. Singh opted for reduced time instead of a monetary award so that she can complete her book,Imagining Nations and Homelands in Indian Literature: Gender and Sikh Identity in India and the Diaspora. She will also present her final piece of research in India, where this week a jury convicted four men of December’s brutal gang rape and murder of a college student. Singh was in Delhi for her Fulbright when the incident happened and recalls getting caught up in the aftermath.

“The case shocked the country and world and turned into a huge revolutionary moment,” said Singh (pictured center during a protest). “I was among those who took to the streets afterward, trying to convince lawmakers to strengthen sexual assault legislation. Some laws did change related to rape, stalking and voyeurism. But marital rape still is not considered a punishable crime in India. Women cannot press charges against their husbands. That’s something Indian feminists continue to fight against.” Full Story

Northern’s UNITED Conference will be held Saturday, Sept. 21, through Thursday, Sept. 26. UNITED stands for Uniting Neighbors in the Experience of Diversity. Presentations, films, art exhibits and other events take place throughout the week. This year’s presenters include an author on anti-Americanism and anti-Semitism, a documentary filmmaker on the experience of Asian Americans, two bloggers who answer questions of young gay people and an entrepreneurial panel (see related story below). Full Story

An entrepreneurship panel featuring Northern Michigan University and Marquette community members will be held at 3 p.m. Thursday, Sept. 26, in Reynolds Recital Hall. Participants include Nheena Weyer Ittner of the Upper Peninsula Children’s Museum, Tom Vear of Donckers and Bob Stefanski, co-founder of Tibco Software and founder of Michigan E-Lab. NMU President David Haynes and NMU Trustee Thomas Zurbuchen, who is associate dean for entrepreneurship at the University of Michigan, will host the event. The panel is titled "Make Your Dent in the Universe: Lessons from Three Entrepreneurial Stories." Full Story

The comedic talents of the Second City have returned to campus to kick off the 2013-14 season at Forest Roberts Theatre. Two alternating productions, The Second City Goes to College and Happily Ever Laughter, continue through Saturday.

Next up will be a new production of Boublil and Schönberg’s Les Miserables Wednesday, Nov. 13, through Saturday, Nov. 16. The show was cast this week. It stars former Broadway actor Paul Truckey (CAPS, pictured) in the role of Jean Valjean. Truckey has performed in the Broadway and touring companies of the show, which is based on the novel by Victor Hugo. Full Story