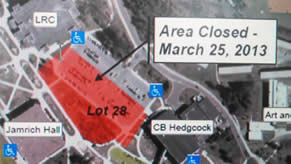 The New Jamrich Hall project is scheduled to begin the week of March 25. A portion of parking lot 28 between C.B. Hedgcock and the Learning Resources Center will be closed for university use. Site-preparation activities will close about half of the lot, as crews install construction fencing and deliver job trailers and heavy equipment. During the second week of the project, excavators will begin preparing the site for underground utilities. Faculty and staff are encouraged to use alternate lots near the buildings. Full Story 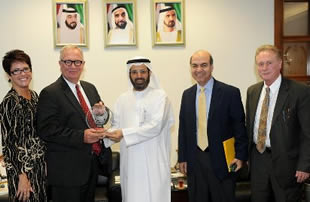 The visit included tours of the university's library and laboratories and discussions about the history of UAEU, research conducted there and possible exchanges between the two institutions. To see a press release on the visit prepared by UAEU, click here.

NMU President David Haynes held his first campus forum to update employees on enrollment, financial aid and the state legislative process. He unveiled a new enrollment goal of 2 percent growth in each of the next three years.

“That’s 182 students this first year,” he said. “We need to do it in small bites and it will take the campus’ cooperation and support. So talk about it, share ideas, help us find students. We also need to determine how much we grow on and off campus. … We are one of two universities that do not offer programs off campus. In today’s higher education market, that doesn’t work. We’ll be at Macomb Community College this fall and in Grand Rapids. The international market is huge, but we haven’t had much growth. With our new director, we will look at what we could be doing differently to bring students here and to bring NMU off campus.” Full Story

Carol Strauss (Modern Languages and Literatures) is one of only 15 faculty nationwide selected to participate in the Fulbright Commission’s German Studies Seminar. The seminar will be held June 10-19 in the country’s capital and is titled “Berlin: Where Cultures Meet and Challenges Abound.” Strauss and other participants will explore how Germany’s political, economic and cultural systems deal with contemporary issues. Full Story

April 15 is not only tax day; it also marks the 50th anniversary of the first broadcast by WNMR-FM from Lee Hall. What began as an “underground student station” similar to Radio X with five hours of programming per day evolved into WNMU-FM, a professional Public Broadcasting affiliate that is on the air 24/7. Full Story

The next “Evening at the Archives” event will focus on the 50th anniversary of Public Radio 90 (WNMU-FM). The NMU Archives is working with station staff members to assemble a presentation of images, documents, oral history interviews and broadcasts narrated by Hans Ahlstrom (WNMU-FM), pictured left. The presentation will trace the history of the radio station, with all of its triumphs and challenges. It is scheduled for 7 p.m. Thursday, March 14, in room 126 of the Learning Resources Center. Refreshments will be served.

Applications for scholarships for the 2013-14 academic year are due by March 5. The application and selection process has been streamlined and automated through development of a web application that matches a student's profile to scholarship selection criteria. The system is more student-focused and less labor-intensive. It was largely because of this improvement that NMU was one of nine colleges and universities nationwide named by University Business magazine in its “Models of Efficiency” national recognition program. For more information on the collaboration between Brian Larson (AdIT) and Robyn Stille (NMU Foundation) that resulted in the new system, read the previous CAMPUS story. 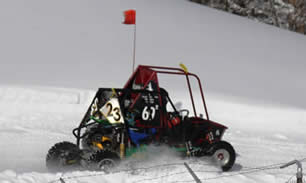